December 17- The Dust Beneath His Feet


A mass of dust, world's momentary slave,
Is man, in state of our old Adam made,
Soon born to die, soon flourishing to fade.
~Barnabe Barnes 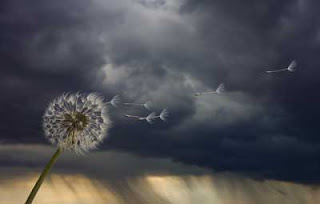 Have you ever experienced the calm before the storm?  I can remember when I was a child watching the neighborhood get eerily silent before a huge storm hit. The sky turned a greenish color. The leaves hung lifelessly from the trees, and the wind ceased to blow. Then it hit. Today we read in Scripture about another type of silence. It is the universal silence that settles upon the earth before God's judgment.

Nahum has been given a vision about Nineveh. You will remember that the prophet Jonah went to Nineveh per God's command and preached that they should repent to avoid judgment. The town repented and experienced 100 percent conversion to faith in God! Unfortunately, that faith did not stick. Nahum is called 100-150 years later to express God's anger and judgment against this capital of Assyria.

Nahum opens with a reminder that God is a jealous God who punishes His enemies. He is in the whirlwind and the storm. The billowing clouds of judgment are the dust beneath his feet. This city of murder and lies will be consumed by her enemies and this will be a result of God's punishment on them. This city, which is the capital of Assyria and run by King Sennacherib, will incur a fatal injury.  Nahum is the voice that sounds the trumpet. Nahum's prophecy was fulfilled when Babylon conquered Assyria.

After our interlude with God revealing that many saints will come to faith in Christ during the Great Tribulation, we are back to the Lamb of God opening the seals on the deed to the earth. Now we have come to the seventh seal. It is the final seal that actually opens up new and more detailed visions of the judgments during the Great Tribulation. The seventh seal opens a scene that is going to reveal seven trumpet blasts.  With each blast of the trumpet, a new plague falls upon the earth in judgment.  These plagues are reminiscent of the plagues that fell upon Egypt. Pharaoh, as a shadow of the future Antichrist, refused to humble himself before God. His hardened heart brought the plagues upon the land of Egypt. Now God sends the final plagues upon the earth to punish mankind for their hardness of heart. The trumpet judgments bring us to the full intensity of God's judgment during the Great Tribulation. 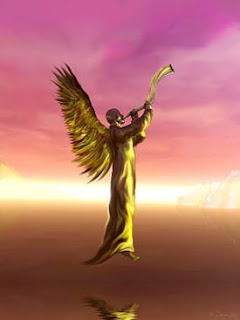 Before these trumpets sound and before the whirlwind of God's judgment is released, there is a deathly silence in heaven when the seventh seal is broken. Seven angels, who stand before God, are given seven trumpets. Another angel has a golden incense burner and is near the altar where the martyred saints have been praying for justice. The smoke of the incense mixed with the prayers of these saints is presented to God. With fire from the altar, this mixture is thrown down to earth and creates lightning, thunder, and an earthquake. God's judgment is in answer to the prayers of the saints and is justified judgment against the evil people who martyred believers in Christ.  This event sparks the trumpet judgments we now witness.

Now, the seven trumpets will be blown in succession.  As a way of reminder, I will say that trumpets are introduced in Scripture early on when the Israelites are told to use two trumpets to call an assembly and to indicate movement into the Wilderness and towards the Promised Land.  In addition, the trumpets indicated movement into war and a warning that God would protect Israel from their enemies.  These symbols of trumpets should be recognizable to the Israelites and should be a comfort to them that although hardship lies ahead, the Promised Land lies beyond the wilderness. This is an apt picture.

The first trumpet is blown and the plague is hail and fire mixed with blood which falls upon the earth causing one third of the earth to burn up. This will occur during the first 3 1/2 years of the Great Tribulation.  The land is affected by God's judgment, just as it was during the Flood of Noah's day.  This time the earth it is not flooded, but instead it is judged by fire.

The second trumpet is blown and a mountain of fire is thrown into the sea. This causes one third of the water to become blood, one third of the sea creatures to die, and one third of all ships to be destroyed.  This judgment has fire affecting not only the land, but also the sea. It is reminiscent of the Nile River turning to blood and affecting the fish and drinking water in Egypt. This plague will have the same effect in the Great Tribulation. We are beginning to see how the famines and thirst will occur.

The third trumpet is blown and a great star falls from the sky onto the earth. Once again, fire is associated with this event. This causes one third of the rivers and the water supply to become bitter and unusable. Many people die from bad water.

The fourth trumpet affects the sun, moon, and stars. One third of each is darkened. It affects daylight and nighttime on earth. This will affect the food supply and commerce.

Now, we have eagles warning about terrors that occur when the last three trumpets are blown.

What do you think of the judgments of God upon the earth?  The flood was fast and furious in Noah's day. This is a slow burn. The Church will not be on the earth for this. Many people will turn to God during this suffering.  The wicked will not be convinced. Even in the face of these plagues, the unrighteous will shake their fists in anger and rebellion against God.

Here are a multitude of reasons to give thanks to God.  His faithful love endures forever.

What a great prayer, "God, give me neither poverty nor riches."

What is your prayer today?