December 30- A Message and A Marriage


A successful marriage requires falling in love many times, always with the same person.
~Mignon McLaughlin 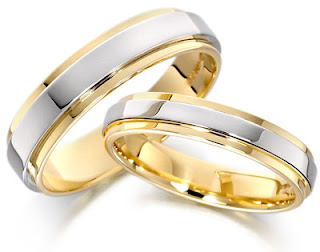 We are racing to the end, my friends.  Can you feel it?  Today we come to the very last book of the Old Testament.  Malachi's name means "my messenger."  This can also be interpreted "angel" because of the Greek Septuagint's translation of this as "angelos" and is similar to the angels to whom the seven letters to the churches are written at the front of the book of Revelation.  God always desires that His message go forth to His creation.  Malachi is writing at the time of Nehemiah in Jerusalem when the remnant from the Babylonian captivity has returned to rebuild and worship God in Jerusalem.  God speaks to all of the nation of Israel in this message from the messenger.  He is even speaking to the twelve tribes that are scattered among the nations.  In four hundred years from the time of this writing God will bring the Messiah to earth for the first time.  Malachi is the last messenger before this occurs. With sarcasm, God confronts Israel on topics that are close to His heart, including His love for Israel, His desire to be worshipped properly, His heart for marriage, and His fair justice.

God proves His love for Israel by recounting the story of Jacob and Esau. You will remember from Genesis 25 that these two twins were born to Abraham's son, Isaac.  Although Esau was the older son and should have inherited the promise of blessing, he was an arrogant and prideful young man.  He sold his birthright for a pot of stew and was tricked out of his blessing by Jacob. God sees the span of history and declares that through His Sovereign Will, He loved Jacob, but hated Esau.  God reminds the nation of Israel through this story that God chose to love Jacob/Israel.  Therefore, the nation of Israel owes God a debt of gratitude.  Esau's descendants, the Edomites, represent all wicked people in history. They are an object lesson to the world.  Israel represents the righteous, who are loved by God, and Esau represents the wicked, who will be hated and judged by God. This is God's universe.  God is in control.

God confronts the Israelites for disrespecting Him in their use of diseased and maimed animals for their sacrifices to Him, not to mention animals that have been stolen and mutilated.  Not giving God your best is a slap in His face.

God calls the Levites to be his messengers among the people. His purpose in choosing them was to bring life and peace to the nation of Israel and to the world. This is God's first line of messengers to form a body of believers who will love Him forever.

God feels strongly about the institution of marriage.  Here, God complains against the men of Israel because of their unfaithfulness to their wives.  They discard the wives of their youth and divorce them.  This is the passage where we see God declaring that He hates divorce.  We learn in the New Testament in Ephesians chapter 5 that marriage is a picture of Jesus and His Church.  In the Old Testament, Israel is pictured as the unfaithful wife to God. The intimacy designed for this relationship alone is the intimacy that those who love Christ will experience for eternity with Him.  Divorce is described as cruel. The New Testament clarifies that only fornication is grounds for divorce in God's eyes. It is to be avoided. God wants these earthly relationships to reflect a spiritual reality.

Do you hear God's messages in these passages?

A New Heaven and A New Earth

We have just gotten one of the last messages from Malachi in the Old Testament that God hates divorce.  It is a picture of something that He does not intend for Jesus and His Bride, the Church.  In this passage in Revelation, we see what God is intending for His Bride as He carries her into eternity.  The old heaven and the old earth have passed away at the Great White Throne judgment. Now we see what Jesus promised to go and prepare for His Bride in the book of John.  Down comes a new heaven and a new earth, highlighted by the New Jerusalem.  This magnificent city is adorned like a bride for her husband.

John hears a shout that declares that God is going to live among His people and be their God.  This is reminiscent of God walking in the Garden with Adam and Eve.  God provided the first earth for the first man, Adam.  Now, we have the last earth for the last man, Jesus Christ. Adam was married to Eve as a symbol of love and intimacy and now Jesus Christ is married to His Bride, the Church and all who have loved and believed in Him.  Do you desire intimacy and to be known and loved?  Jesus promises this to you.  He is the author of love and intimacy. It is an intimacy that will last forever. In this place, Jesus will remove all sorrow, death, crying, and pain. The old world and all of its evils are gone. This corresponds to Malachi's prophecy recorded against Esau.

Once more, Jesus is in a creating mode as Creator.  Just as he created the old heaven and earth in Genesis chapter 1, he is ready to create a new heaven and a new earth.  This time he starts with the words "It is finished!"  This is the third time that Jesus has said those words.  The first time was when he gave up his spirit on the cross.  The second time was at the end of the Great Tribulation when the seventh bowl of wrath was poured out upon the earth, and the final time will be when evil and death are destroyed in the lake of fire.

Promises in the New Jerusalem

Jesus promises to sustain our thirst for life and give all believers the inheritance he promised to them.  There is a promise that believers will be God's children (John 1:12).  He promises that those who have hated him will be doomed in the lake of fire, which is the second death.  Here is a list of people who hate God as seen in verse 8:
Note, these are behaviors and attitudes from which the people who are doomed will have never repented. Their pride and arrogance will seal their fate. 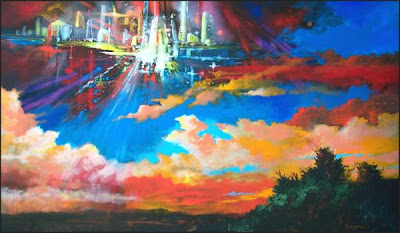 The New Jerusalem is the mansions described by Jesus in John 14:2.  We see a jeweled city from which the light that is provided for from God creates a rainbow of color eternally. The description is that of a cubed city within a sphere.  The walls are jewel stones that reflect light.  The twelve gates to the city are made of solid pearls.  The gates represent the twelve tribes of Israel.  It is through the work of the nation of Israel in providing the world the Law and the Messiah that all believers enter this city.  Pearls are formed from a foreign substance that gets within a mollusk.  The irritation causes a secretion to form around the substance creating the pearl.  Surely the suffering of the Israelites and God's indignation against them is pictured in the pearly gates to eternity.  His Story has meaning and even the suffering has become a jewel.  The foundations of this dwelling of God is laid by the testimonies of the twelve apostles.  The twelve foundation stones reflect the beauty of the God's story in this place. Eternity is built upon God's sacrificial love.

There is no temple in the New Jerusalem. The old system of death and sacrifice is not needed.  Christ has been victorious. Death has been conquered. God illuminates the city and there is no need for the symbolism of night and day, which reflected God purposes on the old earth.  Therefore, there is no sun and moon.  People from every nation are present in the new heaven and earth. They walk in the light of God's glory and love.  Their diversity is seen as glory and riches to God. He relishes what He has created. Nothing evil will ever be allowed in the new heavens and the new earth. The people whose names were written in the Lamb's Book of Life will dwell there with God forever. This is a promise.

How beautiful are the promises of God! Have you ever shared this story with anyone?  Who can we rescue from the lake of fire with the message of God's love and His desire for relationship and intimacy?

In that day, we will sing a new song to our God.  Praise the Lord!

Think of the Church as the bride of Christ as you read this proverb.  Are we being that woman to Him?

What are you loving about God today?

P.S.  Tomorrow is the end, my friends.  What a journey we have been on together!
Posted by Jubilee Gal at 4:00 AM