Do you really believe that the Lord Jesus Christ, the Lord of glory, plans to be a loser in history?
~Gary North 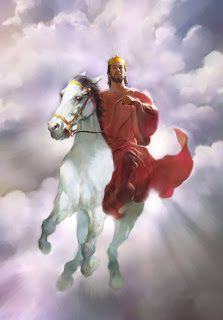 Does it make you feel good to know that all that happens on earth is part of a plan?  One message that has come to me loud and clear this year as we have studied the Bible is that God has a plan.  His Story unfolds and there are no surprises for Him.  He has even given us spoiler alerts on how it all goes down.

Today, the nation of Israel continues to be told God's intentions about the future.  The phrase "On that day" is repeated over and over in the book of Zechariah. What does this phrase refer to?  It refers to a time in the future known as The Day of the Lord that begins when the Church is raptured and the Great Tribulation and millennial kingdom of Jesus Christ occur.  Remember the concept that darkness precedes light in the Hebrew day, and evening comes before morning (Genesis Chapter 1).  For the coming Day of the Lord, the darkness of the Great Tribulation on earth will precede the light of his earthly millennial reign on this planet.  It follows the pattern God set from the very beginning of His Story in Genesis.

In our reading today, Zechariah speaks of the convergence of enemies upon Jerusalem during the Great Tribulation and at the beginning of the Battle of Armageddon. This passage begins with a beautiful description of God, "..the Lord, who stretched out the heavens, laid the foundations of the earth, and formed the spirit within humans."   Our God is a Creator, who made this universe and topped off His creation by putting a spirit within his highest creation- mankind.

We learn that God is going to cause Jerusalem to be completely intoxicating to the rulers on earth during the Great Tribulation.  We have read that political and commercial Babylon (the world system) will be very powerful.  They will get it in their hearts to surround Jerusalem and attack the Jews, who have been reassembled in the land.  Here, we see that God through Jesus Christ will defend the people of Jerusalem (Vs. 8).

The Jews will finally recognize their Messiah at this Second Coming.  In fulfillment of their Day of Atonement, which is the high holy day for the Jews to mourn for their sins, the nation of Israel will corporately mourn for the One they pierced.  They will weep bitterly over their only firstborn son, who died at their hands, but was risen. Jesus in his triumphant return as their warrior king will be a source of sorrow for those who missed him and rejected him the first time.  God loves repentance and humility.  Their sorrow is a balm.

Now another promise by God is given.  In that day, God will pour out His Spirit upon these people like a fountain.  He will cleanse them of their sins and they will recognize their Savior.  There will be no idol worship in the nation of Israel in that day.  Even the crass materialism of the end times will be over. No more dishonesty in order to get ahead financially.  No more relying on "things" to fill that empty hole in the heart. Jesus will fill up that hole.

Zechariah prophesies that the Shepherd will be struck and the sheep will be scattered.  This is the first coming of Christ.  And then in the Second Coming of Christ, two thirds of the people in the land will be struck down and die.  Only one third will receive their Savior.  This has been confirmed throughout our reading as God has consistently presented those who will be saved from Israel as a remnant.  A much smaller portion of the people will accept Christ.  This is that narrow gate to righteousness of which Jesus spoke. This is the small group that will make it through the Great Tribulation period and do the following,


"I will bring that group through the fire and make them pure, just as gold and silver are refined and purified by fire. They will call on my name, and I will answer them.  I will say, 'These are my people,' and they will say, 'The Lord is our God.'"  Zechariah 13:8-9

God is happy with His Story.  It unfolds as He sees fit.  How do you square with this?

Yesterday in our reading commercial and political Babylon were destroyed by an earthquake that decimated the cities of the earth.  The merchants of the earth were in deep mourning to see their prospects for wealth and power utterly destroyed.  Now, we see that heaven is rejoicing at God's righteous judgment against this wicked, Satanic world system. There is shouting and singing in heaven.  "Hallelujah! Salvation is from our God. Glory and power belong to Him alone."  They are happy that the Great Prostitute, which was the false church, has been destroyed, and the city of Babylon, which represented the commercial world system, is now nothing but a smoking pile of rubble.

The twenty-four elders and the four living beings fall down to worship God.  This is the last that we will see of the 24 elders.  From here on out the Church is identified as the Bride of Christ. Now, its time for the wedding feast of the Lamb and his bride is prepared to present herself.  What is she clothed in?  She is wearing white linen, which represent the good deeds done on earth in the name of Jesus Christ.  All who are invited to this feast are blessed. 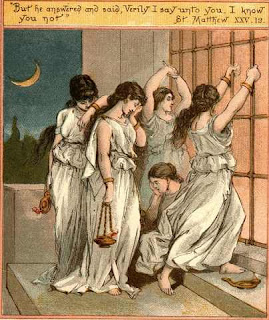 Let me take a moment to remind us of the parable of the ten virgins waiting to get into the wedding feast (Matthew 25:1-13). If you remember, ten virgins are waiting quite a long time for the bridegroom to arrive.  Five of the virgins are wise and have enough oil.  The unwise virgins ask the wise ones to share their oil.  They are denied.  When the bridegroom finally comes, only the virgins with oil are allowed into the wedding feast.  We see that Christ is a long time in coming to the nation of Israel this second time, and when he comes only a small portion of them will receive him, have the oil of the Holy Spirit in their lives and share in the wedding feast with the Church, who accepted Christ by faith.

This celebration of Christ, the Church, the Tribulation saints, and the redeemed nation of Israel will take place on the earth at the start of Christ's millennial kingdom.

The Battle of Armageddon

Before the celebration, John sees heaven opened and one sitting on a white horse who was named Faithful and True.  We know that this is Jesus Christ. You will recall that at the start of the opening of the seals we saw a rider on a white horse as one of the four horsemen of the Apocalypse.  The was the false christ/Antichrist, who brought forth a false peace that became a great war.  Now, we have the True rider on the white horse, who will fight and judge the earth, truly bringing peace on the earth. The picture of this rider is that he has bright eyes and many crowns upon his head.  He has wisdom and authority to rule.  He is worthy through his death to hold this position, as seen in the blood dipped robe that he wears.  We learn that his title is The Word Of God.  Jesus is the essence/logic/personality of God. He embodies who God is. The armies of heaven are with him.  He is the Commander and Chief of all created beings.  How does Jesus win the battle on earth?  The details are not given, but the source of victory is clear- the Word of God, which is the sword that comes forth from his mouth is what determines victory.  He spoke and the universe was created.  Now, he speaks and evil is defeated.

John sees the Antichrist/beast gathering the kings of the earth to fight the Lord.  Remember that this is predicted in Psalm 2. God laughs at their attempts.  Both the Antichrist and the False Prophet are captured by Christ and thrown alive into the lake of fire, which burns with sulfur. Their entire army is killed by the word that comes out of the mouth of the rider on the white horse. This is the Battle of Armageddon.  Vultures will gorge on the wicked people's dead bodies.

God ties all of His promises together to bring about His good purposes.  The story is about Him, folks.  It's not about you and me.  God is our Creator.  He brought forth this world.  He will finish out this world as He sees fit.  We began this book in order to know Him better.  Do you sense His power and majesty?  Are you in awe of His righteousness?

Oh, can we read this psalm with new eyes of appreciation for what it is talking about!

Great advice from a mom...Don't spend your strength on women and don't guzzle wine or crave liquor.  Many men would be wise to listen to this advice.

What did you learn today?