December 7- A Whirlwind of Punishment


They sow the wind and reap the whirlwind. ~Hosea 8:7 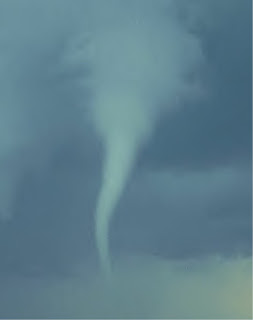 Have you ever had someone wrong you and you could have gotten over what they did, but you are still angry because that person doesn't seem to be sorry for what they did?  It is amazing how healing sorrow and repentance over sin can be in a relationship. Sorrow over having wronged someone is a sign of humility and love. God wants Israel to feel sorry about sin, but that is just not in the cards today.

God is lamenting that Israel has loved Him with a love that is like the morning mist.  It fades as the sun rises in the sky. God has attempted to slaughter them with His words given by His prophets.  He has hoped to slay their desire to love others, but alas, it has not worked. Like their father Adam, the Israelites have rebelled against God. Samaria, the capital of the Northern Kingdom, is filled with liars and thieves. People don't seem to realize that God is watching them. Everyone is aflame with lust. They are like a hot oven that heats up while the baker is kneading his bread.

The princes and people who run the government are constantly drunk. They are guilty of plotting and intrigue against one another. They kill their kings and no one consults God for help.

They mingle with godless foreigners and have become like a half-baked cake, completely worthless.  Further yet, their worship of idols has made them weak like an old man with gray hair and they don't even realize how spiritually weak they have become.

God declares that Israel has broken His covenant and revolted against His law. Because they have rejected what is good, God is allowing their enemies to chase after them. They are worshiping calves they have created with their own hands. They are like a wild donkey looking for a mate as they try to form an alliance with Assyria. The altars they built to take away sin have become the place where the sinning takes place.

They have planted the wind and now they are going to reap a whirlwind of judgment.

God pronounces what His punishment will be for Israel's unfaithfulness. They will be carried into captivity by Assyria where they will eat unclean foods. Unclean food refers to the dietary laws that Moses had enacted per God's instructions. They will be unable to worship the Lord in the proper fashion. They have ignored the prophets who act as watchmen for Israel. And now they have become as despicable as the idol gods that they worship. Because of this, God will turn away from them and leave them alone.  They will become wanderers among the nations and be a people with no home.

Lesson: The Church should learn from the lessons of the Israelites. We should not leave our first love.  The siren call of the world does not compare to the faithful love of Jesus Christ.

This is John's third letter and it is a personal letter written to a friend. It is probably written between 90-100 A.D.  John would be a very old man by now. Once again, we see that John is concerned with the preservation of truth.

John focused in his second letter on the fact that truth trumps love. Now in this third letter he commends Gaius for being faithful and living in truth.  This evidently manifests itself in Gaius providing housing for traveling Christian teachers. We see that not all is well within the Church as there is a man who is trying to influence other people to not house the Christian teachers.

What would the apostle John say in a letter to you?  Would it be a commendation or a warning?

This psalm speaks of planting in tears and harvesting in joy.  That is better than planting wind and reaping a whirlwind!

Fairness is one of God's qualities.  I am thankful for this.