June 10- Building On A Firm Foundation


How firm a foundation, ye saints of the Lord,
Is laid for your faith in His excellent Word.
What more can He say than to you He hath said-
To you who for refuge to Jesus have fled?
~John Keith 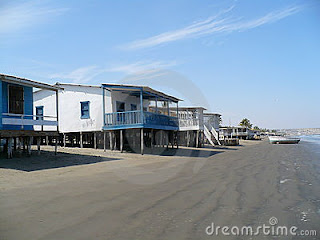 It is common when you built a beach house in certain areas of the country to place the home on pillar/stilts rather than pouring a cement foundation.  This is because the house is being built on sand.  You might imagine that this could be a problem in a strong hurricane, but modern engineering has mastered how to go down deep enough into the soil to pier the pillars into firm ground.  Now, our houses built on sand can actually withstand mighty storms.  Today, Solomon continues to build the Temple on a firm foundation established by his father, David.

We learn that Solomon uses some of the same building techniques and materials used in building the Temple to build himself three palaces that serve different functions.  He also hires a man named Huram from Tyre in Lebanon to cast the bronze items in the Temple.  With the Temple being twice the size of the Tabernacle, there are larger items in the Temple and a multiplication of items, also.  We learn that Huram casts two large pillars of bronze.  The pillars are named Jakin and Boaz.  Jakin means God shall establish and Boaz means In it is strength.  What a beautiful picture of Truth this is.  The Temple of God is a picture of Christ. It speaks of God establishing Jesus as the King of Kings on earth who is able to save the whole world from sin.  It is in Christ alone that the strength of God is found to defeat sin in the world.  An application to believers today is to realize that our faith and salvation is established by God through Jesus' death and resurrection, and only in Jesus will you find spiritual strength.  Instead of a physical Temple to declare God's glory, today, believers are the Temple of the Holy Spirit.  I Corinthians 6:19-20 states,


"Do you not know that your body is the temple of the Holy Spirit, who is in you, whom you have received from God? You are not your own; you were bought with a price."

This is why your sanctification and obedience to God is an ongoing picture of Christ's holiness on earth. In your body God has established His holiness and given you strength to accomplish His will.  Just as a great price was paid by Solomon to complete the physical Temple in Jerusalem, Christ paid a great price to build His Church and put the Holy Spirit in your body, which is now God's Temple. 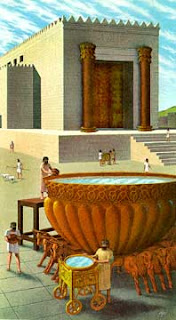 We see there are many more lavers, a sea for washing the priests, more lampstands, etc.  Because the building is larger, there is a need for more light and more room for washing and sacrifice.  The symbols that represent Jesus are multiplied.  We must be aware that in our modern world, it is easy to multiple our access to Jesus and actually make him commonplace.  Some people pray and use Jesus' name in every other word.  They throw out his name like a comma or pause in their sentences.  Some people treat Jesus in a familiar way.  This is not how the apostle John reacted when he saw the resurrected Christ on the throne in his vision for the book of Revelation.  John fell on his face like a dead man at Jesus' presence.  We must be careful to not make our risen Lord common.

Solomon was faithful to bring all of the treasures of David that were dedicated to the Lord into the Temple treasury.  Notice that he was not greedy and did not try to keep things for himself.  Remember Ananias and Sapphira in the early church, who allowed their greed to cause them to lie to the Holy Spirit?

Solomon built the Temple on the foundation of faith in the coming Messiah.  He was diligent, obedient and thorough.  He sacrificed time and riches to build this place. He honored his father, David, through his behavior and he honored God through his obedience.  Do you honor God with your behavior?  How do you conduct yourself in the mundane duties you perform each day?  Are you a servant to others?  Is Jesus common or holy to you?

Today, Stephen, prompted by the Holy Spirit, is recounting for the High Council of Jewish religious leaders the history of the Israelites and their troubled relationship with God.  Stephen is pointing out that throughout their history, the Israelites have rebelled against both God and the leaders that God has put over them.

He states that Moses was chosen by God, but that the Israelites questioned his authority as a leader.  He remembers that Moses predicted that God would raise up a Prophet like him among his own people.  Stephen tells the Council that Moses was a mediator between God and the people.  But, even so, the Israelites rejected Moses and made a golden calf to worship, instead.  Remember, the men on this High Council like to act like Moses is their great authority.  Stephen is implying that they are not true followers of Moses, just as their forefathers were not true followers of God.

Stephen recounts that God gave them up eventually to worship the sun, moon, and stars as their gods.  This led to Israel's captivity in Babylon.  Although Solomon built the Temple of God for his father, Stephen quotes this passage from the book of Isaiah to prove that God does not live in a Temple:

Heaven is my throne,
and the earth is my footstool.
Could you ever build me a temple as good as that?
Could you build a dwelling place for me?
Didn't I make everything in heaven and earth?
~Isaiah 66:1-2

Stephen is trying to get them to realize that God does not live in the Temple that they have come to idolize.  He is teaching them that God lives in the temple of each believer's body.  If a person has believed in the Messiah, Jesus Christ, God is now in them.  Stephen is using the Word of God to convict these men about being as unbelieving as many of their forefathers.  Israel's history is a history of much unbelief seasoned with a small remnant of true believers.

Are you part of God's remnant on earth?  In the scope of human history, believers will look like a small portion of the population according to the Bible.  Do you have the faith to be part of that small group who enters through the narrow gate?

We see Scripture exclaiming the blessings of having children and grandchildren.  Fruitfulness is part of the human experience.  God's plan is for people to have loving families.  If you have believed in Jesus, you are part of God's loving family and He is your heavenly Father.

Gray hair is a crown of glory.  This fits with being a grandparent.  The Bible says that gray hairs are gained by living a godly life.  I don't know about that.  Plenty of ungodly people have gray hairs.

I like the part that says "We may throw the dice, but the Lord determines how they fall."