June 8- I Just Want Some Wisdom


He who devotes sixteen hours a day to hard study may
become at sixty as wise as he thought himself at twenty.
~Mary Wilson Little 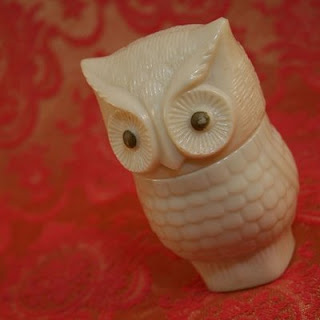 When I became a Christian at the age of fifteen, I felt an inadequacy about my faith in God that bothered me.  I wanted to be further along the path than I was.  I wanted to understand more about God and His ways than I was able to as a spiritual infant.  In my youth as a Christian, I cried out to God for Him to make me wise.  I wanted to know Him. God is faithful.  Over the years I have seen His answer to my innocent, but heart-felt request.  Today in our reading, Solomon asks God to give him wisdom to lead the nation of Israel.

As we begin today's story, Solomon loves the Lord and is offering sacrifices to God, but the Bible makes it clear that Solomon is willing to use pagan altars to do his sacrifices to God.  This is a red flag.  We will see eventually in Solomon's life that foreign wives have a negative influence on Solomon.  After his sacrifices, God comes to Solomon in a dream and asks Solomon what he wants from God.  Here is Solomon's reply,


"Give me an understanding mind so that I can govern your people well and know the difference between right and wrong.  For who by himself is able to govern this great nation." I Kings 3:9  NLT

This is a humble and thoughtful request from a man who is about to attempt to govern a large number of people.  We in America would be blessed if our president and congressional leaders would pray this same prayer before God.  The Lord is pleased with Solomon's request and tells Solomon that because he asks only for wisdom, God will give him not only wisdom, but also riches and honor.  God does admonish Solomon to obey God's commands, which will cause him to also have long life.

After this dream it should be noted that Solomon makes his next offerings to God at the Ark of the Covenant, not at a pagan altar. 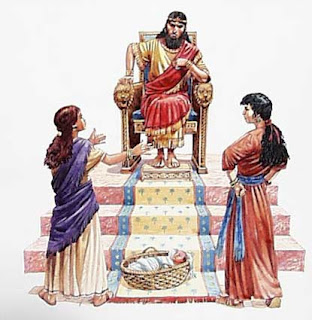 Now we see that God has honored his promise.  Two prostitutes come before Solomon arguing over a baby.  Both women had babies.  One baby died and the two women are fighting over the living child.  Without the benefit of DNA testing, Solomon decides that they will cut the baby in two and each woman can have half.  The true mother of the child protests and offers the baby to the other woman.  In this way, Solomon used wisdom in settling this civil dispute.  This gave the nation of Israel great confidence in their leader.  If a modern day poll had been taken of the population, Solomon's popularity ratings would have been close to 100 percent.

We see that Solomon had 12 governors who ruled 12 districts.  They were required to bring provisions for one month of the year from their districts to supply food and goods for the king and his court.  The people were as numerous as the sand on the seashore as promised by God to Abraham.  This is a time of peace and prosperity for the nation of Israel.  Solomon had an excess of material wealth, including many horses.  It should be noted that in Deuteronomy 17:16, kings were forbidden by God to collect and maintain too many horses.  Solomon did not follow this command of God.

The Bible tells us that Solomon's wisdom exceeded the wisdom of all of the men on earth.  His expertise included zoology, entomology, botany, ornithology, and biology.  He was a naturalist of the highest order.  The natural sciences flourished under his rule.  He was a man who studied and had a great thirst for knowledge.  Men from every country on earth came to learn from Solomon.

Please note that Solomon did not ask for spiritual discernment.  He asked God for wisdom to govern.  This will be key as we watch Solomon's life unfold.

What have you asked God for in your life?  Do you focus on material things or temporal situations?  What qualities in your character would you like for God to shape?

As we watch the early church, it appeared initially that unity and oneness of spirit would be the mark of an amazing unit on earth.  Today, we see that sin will rear its ugly head among the bride of Jesus.  As Christ predicted, there would be trouble in the house.  Ananias and Sapphira were proof that things would not be perfect among believers.

Today, believers who speak different languages and are from different cultures begin to have conflicts.  The Church had a poverty program for widows.  The Jews from Greece felt that their widows were being neglected compared to the widows who spoke Hebrew.  The apostles called a meeting about this and it was decided that seven men should be selected to administer the food program.  This would leave time for the apostles to continue studying the Word so that they could teach others. 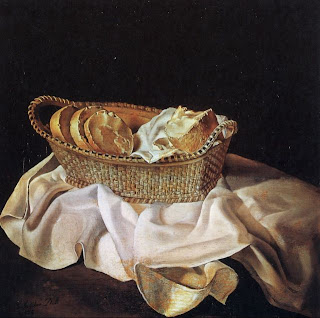 The men chosen to take care of material things were to be of the highest character, full of the Holy Spirit and wisdom.  Here is that word wisdom again.  Dealing with people, handling people's possessions and helping the needy takes incredible wisdom.  This is not a task to be taken lightly.  The poverty program was only for believers who were part of the Church.  It was not for the world at large and was not used as a mission outreach.  The modern Church often uses poverty programs as a mission tool.  We would do well in our churches to make sure that our deacons are wise people who really are filled with the Holy Spirit and not just any person dragged off the street to set up chairs, make coffee, collect the offering. Churches should analyze how to distribute money collected to help those in need based on examples in Scripture.

We see that one of the men chosen to be a deacon was named Stephen.  The Lord used Stephen to perform miracles and signs in order to draw men to Himself.  Stephen is an example that the men chosen to run the poverty program were very mature in their faith.  They were leaders in miracles and signs.  They had great knowledge of Scripture and were entrusted with the wealth of the Church and the needs of some of their members.  We see that certain Jews came and began to debate with Stephen about his claims about Christ and his teachings.  Stephen is eventually called before the High Council and questioned.  There are witnesses who lie about what Stephen said.  The Bible notes that everyone stared at Stephen because his face came as bright as an angel's. This makes me think of Moses' face when Moses came down from the mountain after being in the presence of the Lord.  Stephen is so filled with the Holy Spirit and so wise from the knowledge of God that his face is reflecting God's glory.  This is wonderful.

Does your life reflect wisdom given to you by God?  Does your face reflect God or something else altogether?

Here is a great verse, "Those who plant in tears will harvest shouts of joy." Have you watered your seeds of faith with tears in this life?  This verse encourages you that you will harvest the fruit in joy.  Jesus was buried in tears and resurrected as the first fruit in joy as an example to us.

What did you notice today as you read?