June 29- The Predictability Of Intrigue and Deceit


They are getting me involved in intrigue again,
and I think it follows a classic formula in a soap opera.
~Michael Zaslow

When dealing with the history of royals throughout the world, the predictability of intrigue and deceit is overwhelming.  If you look at the kings of England, for instance, there are stories of betrayals, assassinations, brutality, and abuse.  Such is the way of people who are fighting and clawing for power.  Today, we see that deceit and intrigue continue for the kings of Israel and Judah.

King Amaziah is dead and now his son, Uzziah becomes the king of Judah.  He is considered a good king, but does not tear down the pagan idols in his kingdom. The Lord strikes him with leprosy that lasts until his death.  Because of this his son, Jotham, has to run the daily affairs of the kingdom.

Up north, Zechariah is assassinated and Shallum comes to power.  He only lasts one month because a guy named Menahem goes on a massive killing spree and becomes the king.  He gets assassinated by Pekah. Pekah gets assassinated by Hoshea.  Do you see how predictable the intrigue and deceit gets?  Bad kings who live apart from God live in sin and die in sin.

After Jotham reigns in Judah, Ahaz, his son becomes the king.  Ahaz is an evil man who sacrifices his own son to pagan gods.  Instead of making offerings in the Temple, he offers sacrifices and burns incense under every green tree in his kingdom.  He becomes a vassal of King Tiglath-pileser of Assyria in order to avoid being destroyed by Aram and Israel.  When he visits this king, Ahaz notices a beautiful pagan altar.  He sends a model of this altar to Uriah the priest of the Lord's Temple and has him copy this altar to be used at the Temple of God.   Ahaz ignores the Laws of Moses and the instructions on how God wants His Temple to be adorned and instead, puts a pagan altar for use in God's Temple.  His rebellion against God is evidenced in these actions.

Lesson:  Sin leads to a seared conscience.  With habitual rebellion against God comes the inability to see your sin.  Avoid habitual sin.  It leads to death.

Have you ever heard the saying, "Monkey see, monkey do?"  Today, we see a group of Jews trying to imitate the miracles of Paul.  They are trying to cast out demons by proclaiming the name of Jesus who Paul preaches.  The problem with their attempts is that they do not have the Holy Spirit inside of themselves with which to approach the evil spirits.  At one attempt to cast out an evil spirit, the spirit says to the Jews, " I know Jesus and I know Paul, but who are you?"  The spirit then attacks the men and they flee from the house, naked and badly injured.

What do we learn from this story? 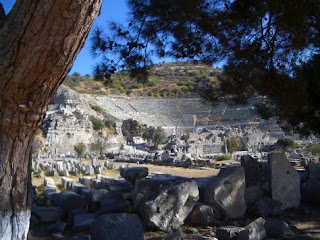 Trouble begins to stir in Ephesus when a silversmith named Demetrius gets the local trade unions to unite against the preaching of the gospel that Paul and his companions are doing.  Demetrius argues that their goddess Artemis is having her reputation and glory besmirched by these men.  It also is putting their successful shrine and idol business at risk.  The crowd becomes a mob and heads to the local amphitheater where they chant for two hours, "Great is Artemis of the Ephesians."  Picture the recent mobs throughout the Middle East who have chanted for freedom.  This is what it would have been like.  They are eventually settled down and dispersed.

Lesson:  The gospel will change lives and may change fortunes, as a result.  This is not always met with enthusiasm. People like to chant.  Screaming something repeatedly does not make it true.

Do you have riches or work that get in the way of following Christ?  Has the truth of Jesus ever ruffled the feathers of anyone you know?

God is worth singing praises to!  We could chant this psalm and feel good about it.  I like that God heals the brokenhearted and binds up the wounds of those who are hurt.  I like that He counts all the stars and names them.

Words can be life-giving water.  Have you ever nourished someone's thirst with your words.  This is what the Apostle Paul is doing on his mission trips.