June 20- Let's Find Out What The Lord Says


A barking dog is more useful than a sleeping lion.
~Washington Irving 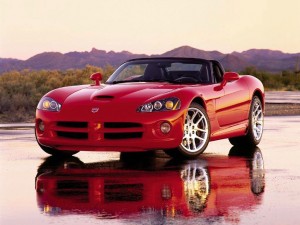 How do you handle major life decisions?  Do you seek advice on what to do from other people that you trust to be wise?  Some people when they are going to buy a car do much thinking and investigation before they take the plunge.  They read magazines like Consumer Reports.  They will check out blogs on the internet that discuss the reliability, gas mileage and consumer satisfaction of the vehicle.  They may ask someone in their family if they like the model of car that they are considering buying. Let's say you were considering getting married.  Would you ask friends and family what they think of the person you are considering for marriage?  How about pre-marital counseling?  Is that something you would consider?  Here is another proposition. Would you seek the Lord's opinion through prayer? Today, we read about two kings and their different approaches to deciding whether or not to go into battle.


King Ahab is still the king over the Northern Kingdom of Israel.  King Jehoshaphat, son of Asa, is the king over the Southern Kingdom of Judah.  You may remember from our readings that Ahab is a bad king.  Jehoshaphat is a good king and he is the son of another good king named Asa. These two kings form an alliance to recapture the city of Ramoth-gilead. Ahab has hatched this plan without consulting anyone. He wants this territory back and that is all he needs to know to decide to move forward. The only thing missing is enough manpower to get the job done. That is where Jehoshaphat figures in.  Before deciding to fight against the Arameans, Jehoshaphat suggests that they find out what the Lord has to say about it.  Here we see why Jehoshaphat is considered a good king in the Bible.  He takes the time to pray and seek God's will on decisions in his life. Ahab has a gaggle of yes men designed to kowtow to his whims. Ahab summons the 400 prophets of Baal, who act as his cheerleaders, and they enthusiastically endorse going to war. Jehoshaphat inquires if there are any prophets of the Lord that they can consult. Ahab admits that there is one prophet of the Lord, but he hates him because he is so negative and always prophesies bad things for Ahab. Jehoshaphat admonishes Ahab to not speak like that about a prophet of the Lord.

Micaiah, the prophet, is called before the kings.  Micaiah has been warned to give the king a positive message about going to war and so that is exactly what he does. Ahab senses his sarcasm and entreats Micaiah to tell the truth.  Micaiah launches into a parable designed to show that Ahab's 400 yes-men prophets are lying to him about the outcome of the battle.  Micaiah uses the parable to let Ahab know that he will die in battle if he chooses to proceed.  One of the prophets of Baal named Zedekiah slaps Micaiah in the face for saying this to the king.  Micaiah retorts that if Ahab comes back alive then the Lord did not speak through him. 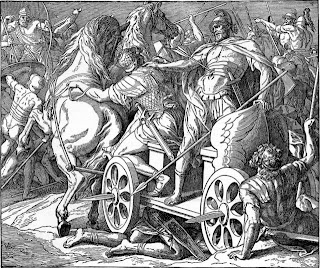 Ahab disguises himself in battle and convinces Jehoshaphat to wear the royal robes.  He is hoping the Jehoshaphat will be the target of the soldiers and he will escape unharmed.  Ahab did not know that you cannot escape from God.  God can see through all of our disguises.  Sure enough, Ahab is shot with a random arrow that pierces through the side opening of  his armor.  Ahab bleeds to death in his chariot.  When his body and chariot are brought back to Samaria, dogs lick Ahab's blood from the chariot in fulfillment of Elijah's prophesy from God about Ahab's death.

Lessons:  Seek God's will for decisions in your life.  To include your Creator is wise as you navigate your journey on earth.  You cannot hide from God.  Be sure, your sins will find you out.  God is true to His Word.  If He has said something will come to pass, it WILL come to pass.  Trust God.

Do you seek God for life decisions?  Do you know without a shadow of a doubt that God will accomplish His purposes on earth?  Do you know that He has promised eternal life for you and nothing can prevent that if you trust in Jesus Christ?

It should be no surprise that God chose a man of tremendous intellect and a background of scholarship to guide the early church and to write the majority of the New Testament. We see today how the Apostle Paul preached to those ancient Christian converts and the means through which all men are saved.  Paul's theme in today's sermon is that God keeps His promises and provides forgiveness for your sins through Jesus Christ.

Let's review the points of Paul's talk in Antioch in Pisidia.  First, we should notice that in order to understand the role of Jesus, it is important to review the history of the nation of Israel.  It is very hard to understand the purposes of God apart from His relationship to the nation of Israel.  For this reason, Paul recounts portions of Israel's history.  Let's list what he highlights:
This is certainly Good News that Paul was able to deliver to his fellow Israelites and to Gentiles who were interested in knowing God.  Paul is able to shed light on God's plan throughout history.  Although Paul did not go all the way back to the Garden of Eden, we know from our reading that God kept His promise to Eve.  He said that one of her children would solve the problem of sin on this earth.  His death would pay the penalty for all of mankind's sin (Genesis 3:15). This is the Good News that Paul is preaching.  The Redeemer Child has come.

Have you ever told any one else the Good News of history?  Has God's story ever penetrated your life?Think of ways that you can tell this story to one other person.  It is a life changing story.

Listen to verse 2 "I will give thanks to your name for your unfailing love and faithfulness, because your promises are backed by all the honor of your name."  Here is verse 3, "When I pray, you answer me; you encourage me by giving me the strength I need."

This is what we talked about today!

We once again have an encouragement to not co-sign a loan.

What did you notice as you read today?  Please share.