June 2- A Prophet Is Not Honored In His Own House


Only in his hometown, among his relatives and in his own house is a prophet without honor.
~ Jesus  Mark 6:4

Absalom is dead.  David has been restored to the place of honor, or has he?  We learn today that not everyone is on board with David being restored to his kingdom.  As a matter of fact, David's own tribe of Judah is the last to reinstate David as king.  David has to tell his nephew, Amasa, that he is going to appoint him as a military commander.  It is after this that Amasa convinces the rest of the tribe of Judah to reinstate David.  After they decide to reinstate him, they are the tribe that does most of the work to get David and his family ferried back across the Jordan River.  This is no small task and their dedication endears those people to the king.

The other tribes get mad at the tribe of Judah for hogging all of the good work to bring David and his family back to Jerusalem.  The conflict between the tribes shadows the conflict that the 12 apostles have around Jesus.  Just as these tribes are jockeying for position with the king of Israel, the disciples will jockey for position with Jesus, the King of Kings and Lord of Lords. 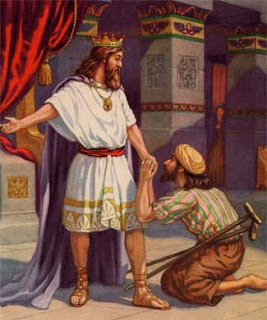 We see David forgive many of his enemies and also restore relationships where misunderstandings had severed good will during Absalom's rebellion.  Mephibosheth is Jonathan's crippled son who was cared for by David.  There had been confusion and deception about Mephibosheth's loyalty to David through the servant Ziba.  This is resolved at this point in the story, and Mephibosheth is restored to eating at the king's table once again.

David continues to have enemies as we see with Sheba from the tribe of Benjamin.  God does not let the sword depart fully from David's life.  David will bare the consequences of his sin until he dies.  Remember, we can be forgiven for sin, but that may not prevent suffering from the consequences of sin.

We also see in today's story that Joab, the commander of David's army, is not shy to kill a person who he feels may threaten David's throne.  Amasa, David's nephew who has been appointed to be a military commander, is killed by Joab because Joab believes that Amasa's true loyalty was to Absalom.  It is true that Amasa had fought in the rebellion on Absalom's side.  David chose to forgive Amasa, but Joab took his life anyway.

David's story is one of political intrigue and personal complications. Overall, David is like the father in the Prodigal Son parable.  He is forgiving the wayward rebels.  Too bad that he did not offer this same unconditional forgiveness to Absalom.  If he had, the rebellion may have never happened.

Who do you need to forgive today?  Who is poised to receive your grace and mercy today?  God has forgiven you.  Go out and forgive others.

I find it interesting that in the stories about Jesus once he has resurrected, he is unrecognizable physically to his followers.  It is not until they hear his voice that they know it is Jesus.  He is able to put on different physicality's and is no longer tied to one body, but his Word/voice reflects his essence and personality.  You and I can hear his voice in the Bible.  We can also know him personally because that Voice is available to us. 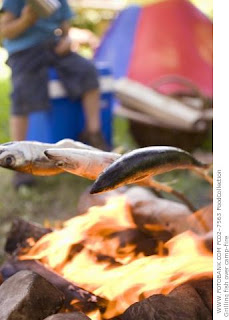 Today, Jesus appears to several of his disciples by the Sea of Galilee.  Peter and the others have gotten in a boat to go fish.  Peter has stripped down to his underwear.  They are not having success in the endeavor.  Jesus is on shore and calls out that they should drop their net on the right side of the boat.  When they do, they get a gigantic haul of fish.  Peter has seen this miracle before.  He now knows who the man on shore is.  He jumps out of the vessel and swims towards Jesus.  Jesus has a fire going and makes the disciples a grilled fish and bread breakfast.  Yum.  That is like having some fish tacos with God!

This is the third time that Jesus has appeared to them after his resurrection.  God likes numbers.  They symbolize things about Him.  Jesus completes his visits in threes to represent each portion of the Trinity.  He also commands Peter three times to take care of his sheep on earth.  Peter is discouraged that Christ keeps repeating this command, but Jesus is representing that each part of the Trinity of God wants the Church shepherded by the disciples.  Peter will be the leader of the early church, especially to the Jewish community. As we will see in our reading tomorrow, Peter is the first evangelist of the  gospel of Jesus Christ to the world.  Peter will begin his ministry of becoming a fisher of men.

Are you a fisher of men for the Lord?  Could Jesus be comfortable having fish tacos with you?  Are you enthusiastic enough to jump out of a boat and swim to God?  Let yourself go and believe with passion.  That is when God can use you.

"I am tired of living here among a people who hate peace."  Have you ever felt that way in this world?
God's words are eternal and always relevant.

Wisdom and understanding are better than silver and gold.  When have silver and gold ever given you the proper attitude about a life problem or situation?  Never.