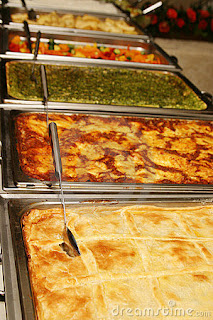 Have you ever been on a cruise? My family and I went on a Mediterranean cruise that stopped in Rome, Sicily, Athens, Ephesus, and Crete.  The scenery was beautiful.  The history was fascinating, but like any person who goes on a cruise, one of the highlights is always the food.  The buffet line on a cruise tempts your average human being to eat double or triple the portion that they need.  This was my experience on the cruise.  I had a double portion. In our reading, Elisha continues to be a type/shadow of Christ who has a double portion of God's Spirit.

There are a string of miracles that Elisha perform. We start with a miracle that shadows the miracles that Jesus would perform, which show his authority over the physical universe.  We all know that iron does not float.  Today, Elisha throws a stick into the water and an axe head that had fallen off of an ax floats to the top of the water and is retrieved by one of Elisha's assistant prophets. While this was a nice thing for Elisha to do, the story has a deeper spiritual lesson.  You and I are like that axe head. We are iron that has slipped off of the handle. We are fallen and depraved and have sunk down into the depths of death because of our sins. The stick is the cross in this story.  Jesus went into the murky waters of death on the cross for us. His death caused us to float up to new life through his resurrection.  You and I have been lifted from death to new life through the work of Jesus on the cross.  Hallelujah!

Have you ever been in a dangerous situation and you wondered if God was aware of your predicament and if He was able to protect you?  The next miracle is a miracle of seeing the concern and protection that the Lord provides for his beloved children.  The Syrians are looking for ways to attack Israel.  This should be no surprise.  To this very day, the Arabs are mobilizing against their ancient enemy Israel.  Elisha is able to foretell the king of Israel about these attacks.  When the king of Syria discovers this, he sets out to kill Elisha.  Elisha's assistant looks out the window and sees the mighty army of Syria surrounding them. When he tells Elisha this, Elisha does something very interesting. He prays.  What he prays shows us what it is like to see God for who He really is. He prays that God will open the eyes of his servant.  God does open the servant's eyes and what the servant sees is that God has filled the hills around Elisha with chariots of fire and horses. God is a protector and a warrior for His precious ones.

Elisha prays that the Aramean army will be blinded.  They are, and Elisha pretends to be someone else and leads this army to the king of Israel in Samaria. The Israelite king consults Elisha to see if he should kill the Arameans.  Elisha is merciful and says to treat them as prisoners of war.  They are eventually released.

This comes back to haunt Israel when the King of Aram lays siege to Samaria. The siege is so intense that people are eating their children from starvation.  The king in Israel is furious at Elisha for having recommended that the Syrians be left alive.  He vows to execute Elisha. Elisha prophesies that the siege will be ended by tomorrow. The king's assisting officer does not have faith in Elisha's prophesy.  Elisha says that it will come true, but this man will not live to see it. The Lord uses lepers to discover his miracle of deceiving the Syrian army into running away.  Eventually, the Israelites are able to go to the abandoned camp and retrieve the food and booty from the Arameans.  As the Israelites storm out of the city gates to get the booty, the assistant officer of the king is trampled by the crowd. So it happened just as Elisha, the man of God, predicted.

Do you realize that God surrounds you with chariots of fire?  Do you live in fear or do you have eyes to see God's protection of you and your family?

Paul and Barnabas have agreed that they need to visit the churches established on their first missionary journey.  Barnabas wants to take John Mark with them.  Paul is strongly opposed to this because John Mark abandoned them on their first journey. The disagreement is so strong that Paul and Barnabas stop their combined ministry and go their own ways. This might seem like a tragedy.  How could these two men of God do this?  We learn that God is able to use our disagreements for His good purposes. 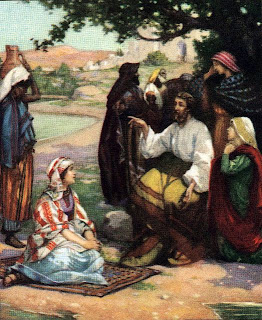 Paul chooses a half Jewish young man named Timothy to go back with him to Lystra, where Paul was run out of town after refusing to be worshiped as Hermes.  Paul and Timothy go from town to town explaining the decisions that the elders in Jerusalem made with regard to the behavior of Christians.  Paul has a vision from God that directs them to go to Macedonia.  In the city of Philippi, they meet a lady named Lydia from Thyatira, which is in modern day Turkey.  Lydia is a wealthy business woman who sells expensive purple cloth.  She is a believer in God, and when she hears the gospel of Jesus from Paul, her heart is opened by the Lord,  she believes the Word of God, acts in faith, professes her belief and is baptized.  This is the progression of how the gospel is spread.  People must hear the message of Christ from the Word of God, have their hearts opened by God to believe, act on their belief by professing their faith to others, and finally, be baptized as a public testimony and identification with Christ's death and resurrection.

Lydia immediately manifests good works in that she provides hospitality to Paul and Timothy, who stay in her home while establishing a church in the area.

Did your conversion to Christ mirror Lydia's?  Who told you the Good News of the gospel?  How long was it before God drew you to Himself?

Vs. 2-3 says, "I pour out my complaints before him and tell him all my troubles. For I am overwhelmed, and you alone know the way I should turn."  Do you do that with God?  Can you see why God called David a man after his own heart.  This is an honest and faith infused relationship.

Keep your eyes glued on wisdom, not on your computer screen or the television.  This proverbs states that a foolish child brings grief to the father and bitterness to the mother.  This can be very true.

What did you see as you read today?  Please share.