The man is the head, but the woman is the neck. And she can turn the head any way she wants.
~My Big Fat Greek Wedding. 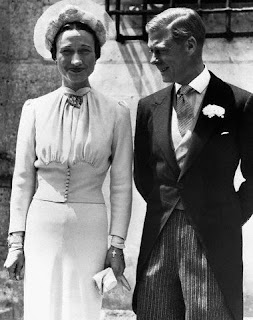 It is an age old story, a woman marries a man and turns his head in any direction she wants.  Remember Adam and Eve in the garden?  Have you ever heard of Wallis Simpson?  Wallis Simpson was an American socialite who married Prince Edward, Duke of Windsor.  There is a catch in this story.  Edward was the King of England/the British Empire when he met and fell in love with Wallis, who was married at the time. She became his mistress.  Edward's love for this woman eventually caused him to abdicate the throne of England and hand the empire over to his brother, George VI.  Today, Solomon does not abdicate his throne, but his many wives turn his head away from God and cause God to take action against Solomon's detestable behavior.

Our reading begins with this ominous explanation, "Now King Solomon loved many foreign women."  You might remember from our readings that the Israelites were forbidden from intermarrying with the pagan people who lived in the Promised Land.  Solomon did not marry just a few pagan women.  He married 700 of them and also slept with another 300 concubines.  The man collected women like some people collect baseball cards!  I am sorry to say that Solomon set up pagan worship centers for these women to the detestable gods of their home nations. Altars to Ashtoreth (fertility goddess), Chemosh, and Molech sprinkled the hills of the Promised Land. Solomon's wives would burn incense to at these shrines and make sacrifices to them.

It is almost unimaginable when you consider the wealth, prosperity, peace, and comfort that God had given Solomon that he would repay God with this sort of slap in the face. The Bible says that Solomon "loved" many foreign women.  May I submit to you that it should say, "Solomon had sex with many foreign women."  Sex brought the downfall of this man. He was not thinking straight. Whatever these women wanted they got. I cannot emphasize how despicable the worship of these pagan gods was.  It included fornication and child sacrifice. This is a low point for Solomon.  God is not mocked.  God takes action.

Solomon's actions set off a chain of events that will affect the nation of Israel's history from here on out.  His epic fail has consequences on an epic scale.

Do you have generational sin in your family that has affected the family later on? Do you have a weakness in your life that is similar to Solomon's collection of women? God's punishment of Solomon is not balanced by repentance on Solomon's part.  Do you have unrepentant sin that you need to acknowledge?

We learn that Jeroboam is the man to whom God chooses to give the kingdom of the ten tribes torn from Solomon. He will head the Northern Kingdom.  In verse 39 God declares, "I will punish the descendants of David because of Solomon's sin, though not forever."  Please note the phrase "though not forever."  God intends to use David's line to bless the world.  No person and no person's sin can thwart God's will. The Messiah will come through the line of David.

Solomon dies and his son, Rehoboam, becomes the king.  We see that Solomon's offspring adds pride to Solomon's sin of rebellion.  Through pride, Rehoboam rejects the advice of the elders to lighten the harsh labor of the people and lower their taxes.  He comes up with some beauties of pride including, "My father used whips on you, but I'll use scorpions!"  What a gem this guy is!

His obnoxious behavior leads to the split of the tribes.  Another epic fail...  It should be noted that God is behind all of these events.  This is His Story.  He is a good storyteller and there is never a dull moment.  The twists and turns will continue as we watch good kings and bad kings rule the twelve tribes of His chosen people.  Stay tuned.

Are you comfortable with God running the universe?  He oversees the good, the bad, and the ugly.  We are told that it is all for a good purpose.  Do you believe Him? 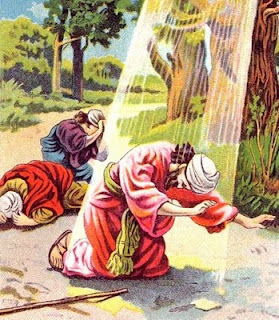 Here is another exciting part of God's story.  The young Church is being persecuted.  A Jewish religious leader named Saul is like a roaring lion devouring the saints.  His passion and zeal have no equal.  Saul gets permission to go to Damascus to round up more believers to execute.  On his journey, Saul is struck down on the road to Damascus and blinded by a bright light.  A voice calls out, "Saul! Saul! Why are you persecuting me?"  "Who are you, sir?" Saul replies.  The voice responds, "I am Jesus, the one you are persecuting! Now get up and go into the city, and you will be told what you are to do."

We learn some very interesting things in this exchange:
Next, God uses a believer in Damascus to minister to Saul.  His name is Ananias, and he is used to heal Saul's blindness, promote Saul's filling with the Holy Spirit, and accomplish Saul's baptism.  God has told Ananias that "Saul is my chosen instrument to take my message to the Gentiles and to kings, as well as to the people of Israel.  And I will show him how much he must suffer for me." I find it interesting that Saul does not eat or drink for three days prior to Ananias coming to him.  During this time, I would imagine that Saul is praying to God and being prepared for the completion of his conversion.  Notice that God uses the number three.  God the Father, God the Son and God the Holy Spirit represent the Trinity and the symbolic fact that the God of the Trinity will be Saul's God in the future.  Not eating and drinking represent the famine of Saul's soul in the absence of the God of Israel, who is a three in one God.

God has chosen his twelfth disciple to replace Judas Iscariot and it is a roaring lion named Saul.  What a great story!!  With man it is impossible, but with God all things are possible.

Saul begins to preach, immediately.  He tells people that Jesus really is the Son of God.  His preaching is so powerful and persuasive that Saul very quickly becomes the target of assassination by the Jewish leaders.  The hunter has become the hunted.  Saul's suffering for God has begun.  The changes we see in Saul are a result of the Holy Spirit in his life.  One becomes a new creation.

Do you know people who seem to know the Bible, but they don't know God personally? Are you one of those people? God is calling people to draw near to Him while He can be found.  Today, God can be found.

This psalm speaks of the attitude of humility that does not assume that one can understand things that are too great for a mere human being to understand.  I like this saying, "Yes, like a small child is my soul within me."

"Those who mock the poor insult their Maker."  Good point.

What did you see today as you read?