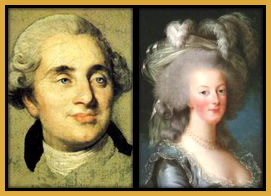 In order to fuel the rebellion that became the French Revolution, rumor and gossip about the lives of Marie Antoinette and Louis XV riddled France.  The excesses of the monarchy were in harsh contrast to the poverty of the masses.  As America found her independence, France was ripe to follow.  Marie Antoinette and King Louis were eventually overthrown and have gone down in the annuals of history as an evil couple.  Today, we meet a much more ancient and much more evil couple- King Ahab and Queen Jezebel.

Before we discuss these two people, we have a series of bad kings who are ruling the Northern Kingdom of Israel.  Here is the list:
In our reading you may have noticed that falling from grace as a political leader during the times of the kings meant a bloody transition for both the leader and his unfortunate family.  The list stops today with King Ahab who goes down in history as one of the most evil kings ever.  His wife's name is Jezebel.  Her father was a king and a priest of Baal in Sidon.  We have seen in prior lessons that Baal is the agricultural god who was widely worshiped in this area at this time in history.

Ahab sets up the infamous Asherah poles and builds an altar and temple to Baal.  The Bible says that Ahab did more to anger the Lord, the God of Israel, than any of the other kings of Israel before him.  We should note that prior to Ahab, Jeroboam was the gold standard for evil.  He is known as the father of massive idolatry in Israel.

It should not surprise us that when God allows great evil, He counters that evil with great righteousness.  This is why we are now introduced to one of the greatest prophets of all time- Elijah.  The first thing we see Elijah do is boldly go before this royal couple to announce that as surely as the God of Israel lives, there will be no rain in the region until Elijah says there will be rain.  Remember, these people are having immoral sex and sacrificing to the idol god Baal and the goddess Asherah in order to have rain and good crops.  Elijah is hitting them where it hurts. 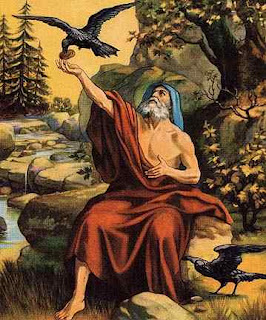 We see Elijah go into the wilderness to have his "wilderness experience."  Great men of God have this in common.  Think of Moses, David, Joseph, Jesus, John the Baptist, and even, Paul.  Great women of faith in the Bible have wilderness trials like Sarah, Hannah, and Ruth. Elijah relies on God for water from a brook and bread from the ravens.  This is a picture of God's provision and God's ability to sustain us, spiritually and physically.  We must go to the wilderness to learn to completely rely on God in our lives.  Eventually, the brook dries up and Elijah is told to go to Sidon, where a widow will provide for him.  When approached, the widow gives Elijah a cup of water, but says that her flour barrel is practically empty.  She was coming to prepare the last meal for her son and herself and then, she is prepared to die of starvation.  Remember that widows in those days were victims of poverty due to no means of earning a living after the deaths of their husbands. 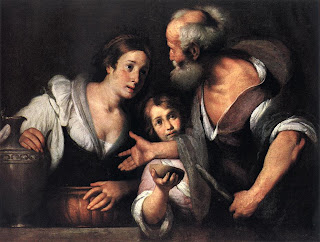 Elijah assures her that if she will cook the last portion of her provision, in faith, God will supply miraculously.  The woman has faith and obeys Elijah.  God miraculously provides. God repeats this provision for these three people for as long as they have need.  One day, the woman's son gets sick and dies.  The woman claims that Elijah has caused his death as punishment for her sins. Elijah prays to God asking why God has brought tragedy to this woman, who has been faithful to help him.  Elijah stretches out over the boy three times and cries for God to let him live.  The boy comes back to life and the woman proclaims that Elijah really is a man of God and that God does speak through him.

What can we learn from this story?  Here are some things I have thought:
How has God provided for you?  This story hearkens back to the Israelites receiving manna in the desert.  It also foreshadows Jesus being fed by angels after fasting 40 days and 40 nights in the wilderness.  It foreshadows Jesus' miracle of filling the empty water pots at his first wedding miracle in Cana.  God is telling a story with these pictures.  God fills people who have emptied there own pride and ability.  If you get out of the way, God can use you.  This requires humility.

We see Peter's humility as he entreats Cornelius to get up off of the floor and not worship him.  Peter states that he is just a man like Cornelius.  Peter confesses that he was hesitant to come because it is against Jewish law for an Israelite to come into a Gentile home.  God has taught Peter that he is not to think of any other person as impure.   Cornelius relates his vision to Peter.  Peter states,


"I see very clearly that God doesn't show partiality.  In every nation he accepts those who fear him and do what is right." NLT

This is huge.  This is a revolutionary concept for the early Jewish converts to Christianity to understand.  Their role of bringing the Messiah to earth is complete.  It is now time for the Gentiles to be grafted into the body of believers.  God's purposes for history unfold as He sees fit.  Peter is a willing student of God.  He is humble as the Lord reveals His will on earth.  Peter is the key instrument in bringing the message to the people groups.  The rock (Peter) presents the Rock (gospel of Jesus Christ) to the earth.  The foundation for the Church is laid by Peter's testimony.

Cornelius and his family listen to Peter's testimony about Jesus sacrificial death and resurrection and the Holy Spirit falls on this group of Gentiles.  After receiving the Holy Spirit, the group is publicly baptized in the name of Jesus.  Please note that they receive the Holy Spirit prior to baptism, not during their baptisms.

Have you been baptized after receiving the Holy Spirit and becoming a follower of Christ?  Baptism is a public testament to a spiritual reality.

I can imagine the new converts to Christ in Cornelius' house reciting the words of this psalm.

"He who covers another person's faults/sins promotes love, but whoever repeats the matter separates close friends."  Very true.