Most political leaders acquire their position by causing a large number of people to believe that these leaders are actuated by altruistic desires.  ~Bertrand Russell 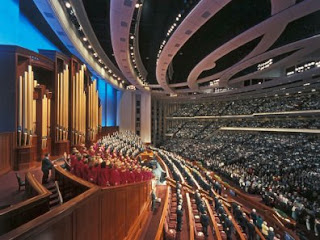 We live in the age of the mega church.  I have gone into churches in the South so big it looks as if a large corporation is housed in the facility. I am not judging these churches just based on their size, but our story today is a warning to all of us not to take pride in numbers. So many times our modern churches judge their success on the numbers of people in the pews or the number of dollars collected during the offering.  Numbers are not always the best way to judge what pleases God.  Today we see King David is relying on numbers to feed his ego and measure his importance as a leader of the people.

For whatever reason, David has decided to count the military men in Israel and take a census of his military might.  God's reaction to this census would lead one to believe that David had wrong motives in counting the men. Rather than relying on God and His power to defeat his enemies, David has fallen into relying on his own power to determine whether or not to approach the enemy and whether or not to think highly of himself and his power.  God is swift in His judgment of David's sin.  God apparently sees it as Israel's sin, too.

God gives David three options on punishment.  He can endure three years of famine, three months of fleeing from his enemies, or three days of severe plague.  David has already experienced a famine and has also spent much time fleeing from enemies.  He is an old man and, although flawed, is less apt to have three years or three months that he wants to sacrifice. Three days seems like a good option and David replies that he would prefer to fall into the hands of the Lord because He knows that the Lord is merciful.  This is a great statement of faith on David's part.

Unfortunately, 70,000 people die in just three days of the plague.  The angel of death is about to destroy Jerusalem when the Lord stops him.  David is distraught as he feels that innocent people are paying for his sin of pride.  David sees the angel of the Lord at the threshing floor of a man named Araunah.  David asks that his family be punished rather than the people of Israel.

God tells David to build an altar for sacrifice.  David purchases the threshing floor, the tools, and the ox yokes to use to build the fire.  David will not accept any of the items as gifts from Araunah because he wants to have this burnt offering cost him something.  The Lord is pleased with David's burnt offering and peace offering.  The plague finally stops.

Here, we see that David sins, confesses his sin, repents and shows faith in the future Messiah's sacrifice for his sin by following Moses' laws about sacrifices to cover sin.  David is an example to all of us on acting upon the conviction of sin.

How do you handle a situation when you know you have sinned and are in the wrong?  Have you considered following David's example of confession and repentance.  God will accept your offering of confession.  David is restored to a right relationship with God through this process.

What is your gut reaction to God punishing sin in this harsh fashion?  Do you have David's humility to accept punishment for sin?  Do you humbly accept God's swift judgment on sin in your life?

We have seen the birth of the Church as the Holy Spirit came upon the believers at Pentecost.  We now see that the disciples are able to perform miracles of healing in Jesus' name.  Peter and John use the name of Jesus to heal a lame beggar and this creates a preaching opportunity for Peter once a crowd assembles to see the healed man. 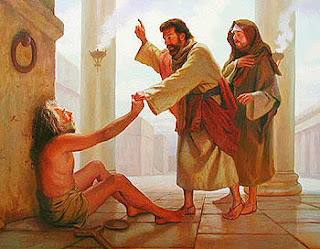 Peter clarifies for the crowd that this healing was accomplished by the God of Abraham, Isaac, and Jacob in order to glorify Jesus Christ. He reminds the crowd that they are accomplices to the murder of the Author of life, but that God raised him from the dead.  As witnesses, Peter and the apostles are now able to use the name of the risen Lord Jesus to heal people.

Peter says that they killed the Lord in ignorance, but God was fulfilling Scripture.  In asking them to turn from their sins, Peter reminds them that Moses and all the prophets, starting with Samuel, were speaking of Jesus Christ and that Jesus was descended from the Jews as promised in their ancient writings. Peter appeals to the Israelites to participate in the covenant that Abraham received that the whole world would be blessed through him.  Jesus, when raised from the dead, was sent first to the house of Israel with the message of salvation through the forgiveness of sins.

Peter is fishing for men, just a Jesus predicted he would.  The Good News of Jesus is that the problem of mankind's unpunished sin before a Holy God has been solved by the sacrifice of Christ.  Peter is faithfully offering this good news to the Jews.

Have you accepted this good news in your life?  God's story that started in the Garden of Eden is climaxed when Jesus dies for the sins of the world.  The Redeemer Child solves the age old problem of sin.  Jesus conquers death.  Now the story unfolds as God redeems His chosen children to extend His mercy to His creation.

Vs. 2 says, "We look to the Lord our God, for His mercy, just as servants keep their eyes on their master, as a slave girl watches her mistress for the slightest signal."

Do you watch for God's signs and signals on how you should behave and conduct your life?  Is this statement true for you?

Wise people are known for being understanding.  Discretion is a good thing like a life-giving fountain.  Are you discreet?  Wise people can be persuasive.  Do you feel Peter was wise and persuasive today?

What did you see as you read today?