June 23- The Power Of A Witness


Can I get a witness?
~Marvin Gaye 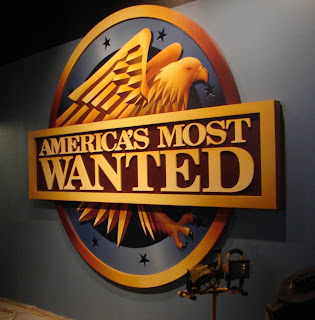 A witness is someone who sees an event and reports what happened. With firsthand knowledge, a witness can help solve a crime or point a person in the right direction based on the information that they have. The popular television show America's Most Wanted relies on witnesses who have seen the profiled suspects to call in and report what they have witnessed.  Through their testimony many unsolved crimes have been solved and the guilty suspects have been convicted. Today we see that a lowly servant girl serves as a witness to God's power through a prophet and the results are amazing.

But first, we are going to talk about how Elisha is a shadow/type of Christ.  You may remember that in 2 Kings 2:9-15, when Elisha is being chosen as Elijah's successor, he asks to be given a double portion of Elijah's spirit.  As Elisha's ministry unfolds, it becomes obvious that this request has been granted by God.

Here is a further list:
Today I am going to focus on the witness of the Hebrew slave girl, who had been taken captive by Aramean raiders in the invasion of Israel.  She had been given to Naaman's wife as a maid, and one day she tells her mistress that there is a prophet in Samaria who could heal Naaman of leprosy.  This girl is witnessing to her captors about the power of God.  I love that God uses the lowly to accomplish great things.  He uses the witness of the humble to convict the proud.

Naaman goes to Israel and presents a letter to the king of Israel about his leprosy.  The king proclaims that he is unable to heal leprosy and feels that this is a ploy to find an excuse to invade Israel again.  Elisha hears of the situation and sends for Naaman.  So Naaman, who is the commander of an army that has successfully defeated many people, comes with his chariots and horses to Elisha's door.  Elisha does not come out to greet Naaman.  He is not respecter of persons, just like Jesus was not respecter of persons.  Elisha tells Naaman to wash himself in the Jordan River seven times and he will be healed. 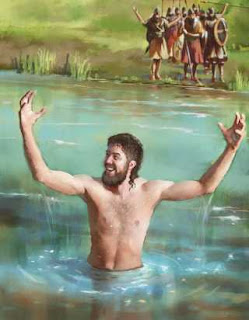 Naaman is chapped.  As a proud and powerful man, he is insulted by several things.  First, Elisha did not personally come out and greet him.  Second, the Jordan River is a muddy dump compared to the rivers in Lebanon where Naaman is from.  Third, this is an inglorious way to perform a miracle.  Naaman is prideful and God is going to deal with what really needs to be healed in this man.  Remember from our past readings that leprosy represents sin in the Bible.  God intends to wash this man of his sin.  Naaman's officers convince him to swallow his pride and follow the instructions of Elisha.  Notice that obedience and faith in what he is told to do is part of Naaman's healing.  Jesus was big on people having faith to be healed.  Naaman follows the instructions of Elisha and is healed.  We see a new man who comes out of the water on the seventh washing.  Seven represents the number of completion.  God rested on the seventh day from creation and now, Naaman can rest from the burden of leprosy and from his sin.


We see true faith in Naaman as he declares that he will only make sacrifices to the Lord when he returns home.  He takes back some of the dirt from Israel as a reminder of the God of Israel and what He has done to transform Naaman's life.  He even requests forgiveness when he is required to accompany the king into the temple of Rimmon for sacrifices.  He must bow to the idol when the king bows.  For this future sin, he seeks forgiveness from God.  That, my friends, is a thankful and contrite heart. Naaman is completely humbled and contrite before the One True God.

What do you think about the witness of this humble girl and how it transformed a powerful man's life?  How has your humble witness changed others' lives?  Be faithful as this girl was faithful to witness to God's power on earth.

I must make one comment about Gehazi, Elisha's servant.  We see in this story that Gehazi is overcome with greed and deceptively goes back to Naaman to accept gifts that Elisha had refused.  Gehazi takes the gifts and keeps them for himself.  When his sin of greed is revealed to Elisha, Gehazi is stricken with leprosy.  The irony in this story is that one man (Naaman) is healed of his sin of pride and leprosy, while the other man (Gehazi) embraces the sin of greed and becomes leprous.  This is a warning to each of us to not embrace our sin, but humbly confess our sin and be cleansed of the spiritual leprosy in our lives. 1 John 1:9 reminds us that if we confess our sins, He is faithful and just to forgive us of our sins and cleanse us from all unrighteousness.

The early church is in transition and many things must be decided.  One of the major issues that the early Jewish leaders of the Church had to work out was how to start to wean themselves off of the reliance on Moses' laws.  It was becoming obvious that some of their practices would be difficult to incorporate to the Gentiles who were being saved. 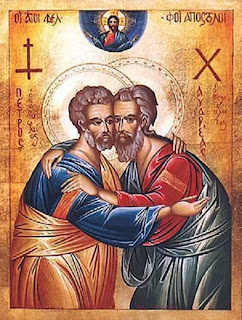 There is a discussion as to whether or not to compel Gentiles to be circumcised in order to follow the Law.  Remember that all Jews were to be circumcised as a sign of the covenant that God made with Abraham.  Peter gets up in the long discussion that the leaders are having and witnesses to the fact that God has confirmed that He accepts the Gentiles by giving them the Holy Spirit. God has made no distinction based on circumcision.  Therefore, Peter argues that they should not burden the Gentiles with the yoke of the Law, which even the Jews could not keep.  After Paul and Barnabas witness to what the Holy Spirit did for the Gentile believers during their mission trip, James gets up to speak.

James points out that what Peter is saying about the conversion of the Gentiles squares with what the Scriptures say.  He points to passages in books of Amos and Isaiah to say that the Gentiles should be accepted into the Church without being troubled about many of the Laws.  James is of the opinion that certain practices should be forbidden.  Those include eating meat sacrificed to idols, sexual immorality, consuming blood, and the eating of meat from strangled animals.

We see that two men are sent back to Antioch with Paul and Barnabas to witness to this decision by the elders of the church in Jerusalem.  The men are Silas and Judas.  The church in Antioch receives their message with great joy.

Why do you think sexual immorality is always mentioned as something to be avoided?  What does our sexual behavior represent in a spiritual sense?  What are these men witnessing to?  Blood is the life force in a living creature.  Pagan religions would drink blood to superstitiously receive life power from the animal's blood.  James is discouraging practices that represent false beliefs.  Sexual intercourse was also used as a means of enticing the pagan gods to make the land fertile.  The elders of the Church wanted Gentiles to know that this was not okay with the God of Israel and the Lord Jesus Christ.

It is wicked to accept a secret bribe in order to pervert justice.

What did you notice as you read the Bible today?