Miracles are a retelling in small letters of the very same story which is written across
the whole world in letters too large for some of us to see.
~C.S. Lewis

If you search the Internet for accounts of miracles, you can find some pretty interesting stuff.  Unfortunately, many of the stories are false.  For instance, there is a story about a miracle that happened in Egypt in 2008.  In the account, there was a Muslim man in Egypt who killed his wife because she was reading the Bible.  He then buried her with their infant baby and their 8 year old daughter.  The two children were alive when they were buried.  The man then reported to police that an uncle had killed the kids.  Two weeks later when another family member died, they went to bury that family member in the same place.  Under the sand, they found the two children alive.  When asked how they survived, the 8 year old said, "A man wearing shiny white clothes, with bleeding wounds in his hands, came every day to feed us.  He woke up my mom so she could nurse my baby sister."  The story goes that this was reported on Egyptian television.  The female news anchor supposedly proclaimed, "This was none other than Jesus, because nobody else does things like this!"

With the completion of Scripture, God is able to use the miracle of the Word of God being heard and believed to transform the life of a person.  God is able to do  miracles at any time, but it should be noted that the miracles recorded in the Bible always have purpose and focus.  The miracles are used to further the ministry of his prophets or apostles and bring glory to God, or are designed to bring judgment on a the unrighteous.

Today Elisha shows the power of God through amazing miracles that reflect God's goodness and power.  Elisha acts as a prophet to King Joram and King Jehoshaphat as they seek God's counsel on whether or not to attack Moab.  Elisha predicts a miracle of water that will fill the valley to supply the troops and animals with drinking water.  This same water is used to entice the Moabites to attack the Israelites and enter their demise.  As proof of the despicable culture and religion of the Moabites, we are told that King Mesha of Moab sacrificed his own son to his god, Chemosh, as the battle appeared lost.  This is why God is so opposed to the idolatry that infected Israel.  These practices are abhorrent to God.  May I take a minute to say that any time a culture finds excuses for killing their own children it is an abomination to God. 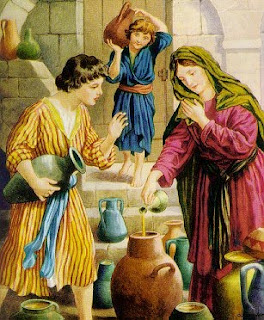 Elisha performs a miracle that is similar to the miracle that Elijah performed for a widow.  Elisha's miracle is even more extensive.  One of the widow's from among the prophet friends of Elisha comes to Elisha and says that there is a possibility that her two sons will be thrown into slavery because of debts.  Elisha tells the widow to bring what she has in the house of her oil and to go to all her neighbors to request that they give her empty jars. She obeys his command and brings them and begins to pour her meager amount of olive oil into a jar. Miraculously, God causes every jar and container to be filled to the brim with olive oil.  The oil is apparently worth enough to pay her debts and secure her future.  This is a picture of God being willing to fill us with the Holy Spirit to abundance, if we are willing to empty ourselves of our pride and confess our sinfulness to Christ, who is willing to forgive and save us. We are to be empty vessels (some of us are cracked pots that need mending, lol) filled with the oil of the Holy Spirit. This filling secures our future inheritance in heaven.

The next miracle is given to a lady who provides a prophet house/room for Elisha.  This is a beautiful picture of hospitality and giving.  This lady is not expecting anything in return, but Elisah consults his assistant, Gehazi, to consider what he might do to repay her kindness.  Gehazi points out that the woman is childless.  Elisha is so filled with the power of God's Spirit that he is able to immediately prophesy that she will get pregnant and have a child within the year.  It comes to pass that she has a son.  This miracle is a beautiful picture of the fruitfulness of the Holy Spirit.  God's Spirit produces life and good fruit.

You and I are beneficiaries of the miracle of Christ's resurrection.  Through this miracle we receive the forgiveness of our sins and the blessing of the Holy Spirit in our lives, which produces the fruit of the Spirit in us.  Praise God!  It is also a miracle that we are able to read God's thoughts through the Scriptures. Our Bible is a miracle.

Do you need miracles to confirm your faith in God?  Have you acknowledged the miracle of God's revelation of Himself to mankind through the Bible? 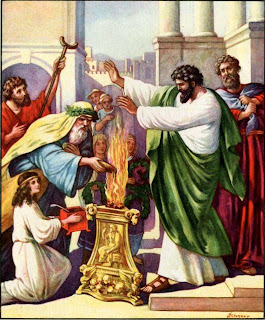 Miracles are also used in Paul's ministry as he spreads the gospel of Christ to the nations. Paul is in Lystra when he sees a man that has faith to be healed.  He heals the man's paralysis.  The crowd is amazed and decides that Barnabas is Zeus and Paul is Hermes. These are Greek gods. The local people decide to sacrifice to Paul and Barnabas.  The men are horrified by this and tell the crowds that they are mere humans.  Some Jews are in the crowd begin to turn the people against Paul and Barnabas. In almost no time, they become a murderous crowd, turning against Paul, stoning him and dragging him out of the city.  Paul survives and leaves for the city of Derbe.

Paul and Barnabas go back to the various cities where churches have been planted and choose elders, pray for them, and turn them over to the Lord. They warn the Christians that their faith will be cemented through trials.  We are seeing that this is going to be an ongoing situation for the Apostle Paul.  Remember when Jesus said that Saul would learn how much he must suffer for my Name?  This is Paul's comfort zone throughout his ministry.  Maybe we should call it his uncomfortable zone.  Finally, Paul and Barnabas go back to Antioch in Syria and report to their home church all that has occurred on this first missionary journey.

Here we see an example of how the church is to conduct church planting.  It is always defined by the preaching of the Word.  Conversions occur and are sealed by the Holy Spirit.  Church government is set up by appointing elders to shepherd the body. Finally, the group is turned over to the Lord, who ultimately sustains His body on earth.

Have you supported any missionaries in your life?  Think back to the widow who gave room and board to the prophet Elisha, have you had an opportunity to give hospitality to someone who is in ministry and needs your help?

I would imagine that the Apostle Paul would have been able to pray this psalm to God after his experience in Lystra.

"A cheerful heart is good medicine, but a broken spirit saps a person's strength."  So true.

What did you notice today as you read?