But if you will not do so, behold, you have sinned against the Lord,
and be sure your sins will find you out.
~Numbers 32:23

When George W. Bush declared war on Iraq after 9/11, many people felt that he was exacting judgment on Saddam Hussein for his father, George H. W. Bush.  During the 1990's George Herbert Walker Bush was the president of the United States and was the commander and chief during the Gulf War.  While America successfully stopped Saddam Hussein from invading Kuwait, many felt that President Bush had failed by not capturing and killing Saddam Hussein after defeating the Iraq army.  Saddam Hussein behaved like a man who had sinned and gotten away with it. Once his son got in office, Bush the younger led America in a war that resulted in the capture and eventual hanging of Saddam Hussein.  The son exacted judgment for his father.  Saddam's sin found him out. Today, Solomon exacts judgment against his father David's enemies, also.

As our story begins, David is nearing death.  As he prepares to go the way of the earth, David admonishes Solomon to do the following:
David then lists people he wants Solomon to attend to upon his death.  He requests that his long time military commander Joab, a man of  violence who killed both Abner and Amasa, not die in peace.  For Shimei, a man who cursed David as he fled for his life, David trusts that Solomon will devise a bloody death.  David asks that the sons of Barzillai be treated kindly and be made permanent guests of the king.

Solomon exacts the judgment upon these people as his father requested.  Adonijah, David's rebellious son, is killed after requesting to have David's virgin nurse and companion become his wife.  Joab is killed after Adonijah's death.  Finally, Shimei dies after breaking his agreement to never leave Jerusalem.  These killings were done by Solomon's military commander, Benaiah.

After exacting judgment on these enemies of his father, David, the kingdom is firmly in Solomon's grip.

David's desire for his son was that he be obedient to the Lord.  We will see that Solomon, although very wise, will never have the heart for God that David displayed.  David admonishes Solomon to rule the kingdom by following God's laws and commands.

Do you run your life by following Biblical principles?  What problems can be avoided by doing this?

Today, we see that judgment is exacted by God for actions against God's Holy Spirit.  The early church is growing miraculously.  People are sharing property, communing together, praying together, eating meals and fellowshiping with one another.  But, Jesus warned that his Church on earth would be bread with leaven in it.  In other words, there would always be sin and rebellion in the Church. 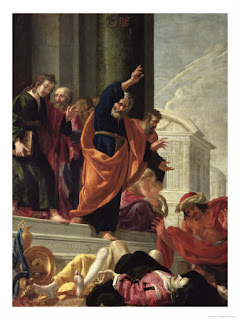 Our story begins with a man named Ananias who sold property and brought some of the money from the sale to the apostles for their work.  The problem is that he claimed to have brought the whole amount he received, when actually he only brought a portion. Peter discerns that Ananias is lying to the Holy Spirit.  When he confronts Ananias about his lying to God, Ananias collapses on the floor and dies.  Sapphira, Ananias' wife, was with him when he sold the property.  She comes to Peter three hours later, unaware that her husband has lied and died.  Peter asks her if the amount of money they gave represented all there was of the sale.  Sapphira follows her husband in lying to the Holy Spirit and also follows her husband in death.  These two thought they could sin and not be caught, but their sins found them out. God exacts judgment on these two people.

The ministry of the Holy Spirit through the disciples is resulting in a ministry that mirrors Jesus' ministry on earth.  It includes healing the sick, casting out demons and teaching the truth of the Scriptures.  Peter and John are arrested and thrown in jail for their ministry.  They are released by an angel of the Lord to resume their work.

They are eventually taken in front of the religious council again and rebuked to not teach about Jesus.  Peter again refuses to obey men rather than God.  A member of the council named Gamaliel convinces the council to let Peter and John go.  He argues that if this movement is not of God, it will dissipate.  He warns that if it IS a movement of God, the council will find themselves fighting against God, Himself.

The council is convinced to let Peter and John go, but first they have them flogged.  Peter and John are elated to be counted worthy to suffer for Christ.

Notice that these men who earlier were cowering in the upper room and who fled from Jesus during his suffering are now transformed by the Holy Spirit into men who boldly speak the truth about Jesus at each opportunity.  They have God's perspective on suffering.  Rather than avoiding hardship and suffering, they now see it as a privileged way to identify with their Savior.

Do you have the Holy Spirit's perspective on suffering?  Do you consider suffering an opportunity to relate to Jesus?  Do you have unconfessed sin that you need to take to the Lord before your sin finds you out?

There is a way that seems right to a person, but that way leads to death.  Ananias and Sapphira are a great example of the truth of this proverb!