June 15- Your Actions Have Not Gone Unnoticed By God


I intended to have gone to Africa in cognito.  But the fact that a white man, even an American, was about to enter Africa was soon know all over Zanzibar.
~Henry Morton Stanley

Many Hollywood stars try to go out in public in cognito in order to not be noticed.  I think of Michael Jackson and his scarves, hats, sunglasses and masks designed to hide his real appearance.  The hopes that he could go unrecognized were futile.  Today, Jeroboam's wife tries to go in cognito to a prophet of God named Ahijah to learn the fate of her ailing child. 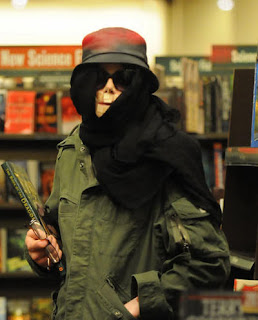 As our story begins, this queen of the Northern Kingdom does not want to be recognized when she goes publicly to a man of God.  The rumor mills were probably in full force as the kingdom was aware that the king's good child was deathly ill.  Although the prophet Ahijah is old and practically blind, God tells him who has come to see him.  Even in our disguises, God sees us.  Ahijah has a message from the Lord for Jeroboam.  God declares that although he ripped the kingdom from David and gave it to Jeroboam, Jeroboam has done more evil than all who have lived before him.  Whoa!  That is a huge statement.

Jeroboam has really led Israel astray.  God pronounces that He will kill all of Jeroboam's sons and burn his dynasty like one burns garbage. His family will have disrespectful deaths that include being eaten by wild dogs and vultures. Jeroboam's one good son, who the queen has come to inquire about, will be the only son to die and be buried respectfully.  God prophesies about the Northern Kingdom's eventual captivity.  This occurs in the future.  Jeroboams sin and rebellion against God has not gone unnoticed.  God's judgment against this sin is just and inevitable.

Now, we look at what is going on in the Southern Kingdom.  Rehoboam is doing evil in the sight of the Lord.  He has built pagan shrines and set up Asherah poles, where people come to have sex and try to get the agricultural gods to provide rain and good crops.  It is also a good excuse to have immoral sex.  We see that the peace that Solomon experienced is over.  An Egyptian king comes and attacks Jerusalem and steals the riches in the Temple.

The next king in the Southern Kingdom is Abijam.  His mother was Absalom's daughter and her name is Maacah.  You should begin to notice that we are told the names of the king's mothers.  God is showing us the important and vital role that a mother plays in the spiritual life of her children.  It may not surprise you to know that this king's heart was not right with the Lord.  Bad King. This king fights against the Northern Kingdom constantly.  Jeroboam of the North will fight continually with the kings of the South during his reign.

After Abijam in the South comes Asa.  Asa is a good king of the Southern Kingdom.  He is the grandson of Maacah, who was Absalom's daughter.  He dethrones Maacah as the queen mother because she has set up an obscene Asherah pole.  He banishes the shrine prostitutes and cleans up the smut.  We would call him an anti-pornography, anti-idolatry king.  Good for him.  Although he cuts down many Asherah poles, not all of the pagan shrines are demolished.  Asa is faithful to God throughout his lifetime.  He fights with the Northern Kingdom and secures alliances with Damascus to attack Israel in the north. He may have had diabetes that contributed to his death, as the Bible describes him having seriously diseased feet when he died.

God is working in the Church and is directing His will through His Holy Spirit.  Today, we meet a devout God worshiper named Cornelius.  He lives in Caesarea and is a Roman army officer.  He fears God, as does his whole family.  He gives money to charity and regularly prays to God.  One day in a vision, God comes to Cornelius and says that his prayers and gifts to the poor have not gone unnoticed by God. Once again, we have evidence that God is watching our lives. He tells Cornelius to send men down to Joppa to find a man named Simon Peter. 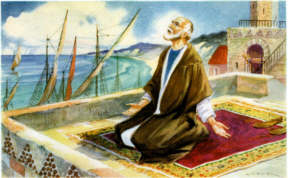 Meanwhile, Peter is praying on the roof of a house when he falls into a trance.  We are told that it is around noon and Peter is hungry as he waits for lunch to be prepared.  In his vision, Peter sees a large sheet come down from the sky containing animals, reptiles, and birds.  The Lord tells Peter to go kill and eat them.  Peter says that he would never eat things forbidden by Jewish law.  Doesn't this sound just like the type of conversations that Peter always had with Jesus?  Peter is constantly surprised by God.

The Lord tells Peter to not consider something forbidden that God has not forbidden.  In other words, God is changing the commandment about clean and unclean foods.  The need to distinguish these foods is no longer necessary now that the Messiah has come to earth.  Remember that these dietary laws set the Israelites apart from Gentiles and protected them from parasitic illness in order to preserve them as a people group so that the Messiah could be born from them.  Now that the Messiah has been born, these dietary laws are no longer needed.  Peter is perplexed.  The messengers for Cornelius arrive and the Holy Spirit tells Peter to go with the men without hesitation.  The men are Peter's guests, although they are Gentiles, and the next day Peter and some other believers accompany these men to Caesarea.

Do you follow strict eating rules that you feel God has mandated?  How do you square your rules with this passage in Scripture?  Do you experience freedom in Christ?  Are you bound by man-made traditions?

This psalm speaks of the blessings of harmony and unity of brothers.  Our readings today show Israel in disharmony apart from true faith in God.  The New Testament reading shows us God breaking down differences in order to create unity and harmony in His Church.  Remember that harmony is achieved by different notes being played at the same time to blend together.  That is what creates the best tune.  Diversity in unison.

A ruler who lies is a despicable thing.  Bribes really work, especially in a corrupt system.