June 25- Judgment Of The Wicked


It is not light that we need, but fire; it is not the gentle shower, but the thunder.
We need the storm, the whirlwind and the earthquake."
~Frederick Douglass 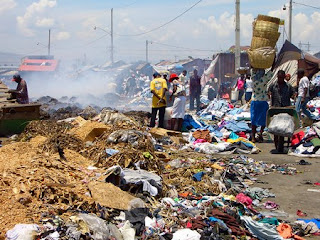 There was great controversy in 2010 when Pat Robertson, a well known evangelical Christian broadcaster, proclaimed that the devastating earthquake that killed 100,000 people in Haiti was a curse from God brought on by a pact that the people of Haiti made with the devil years before in order to free themselves from the domination of the French under the rule of Napoleon the Third.  Robertson contended that the many disasters Haiti has experienced are a result of God's judgment against them and are a way for God to have the people of Haiti realize their need to turn to Him.  We have no way of knowing if Pat Robertson is correct or if he is off of his rocker, but today we have no doubts that God is judging the wicked people of the Northern Kingdom of Israel and the surrounding area, and He is using Elisha as a prophet to proclaim His judgment.

The first judgment is against the wicked king of Aram named Ben-hadad. Ben-hadad is now an old man and wants Elisha to ask God whether or not he will get well after a severe illness. He sends Hazael as his messenger.  You may remember that in the book of I Kings there is a prediction that Hazael will become the king of Aram.  Elisha prophesies that Hazael will become the king of Aram and will do horrible things to the people of Israel. We see Elisha weep at the future suffering of Israel, which is a judgment from God for their disobedience.  This foreshadows Jesus' weeping over Jerusalem at her rejection of her Messiah.

Elisha also has a young prophet under him anoint Jehu to become the king of Israel.  Jehu will be an instrument of judgment against the household of Ahab and Jezebel.  Our reading ends with Jehu being announced as the king of Israel.

How do you feel about God judging the wicked?  Do you feel relieved that there is justice in the world?  Are you disturbed at God's wrath?

Do you remember how demons used to like to shout out to Jesus during his ministry?  Wherever he went, there was always some demon possessed person who was shouting to Jesus that he was the Messiah.  Today we see a demon possessed girl shout to Paul and Luke as they minister in Macedonia.  The demon taunts Paul day after day, saying that these men are servants of the Most High God and tell people how to be saved.  Paul eventually calls the demon out of the girl after getting exasperated with it. 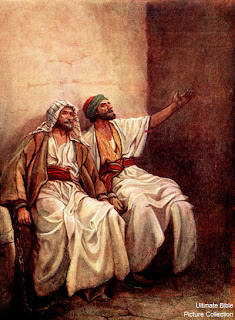 The girl was able to do fortune telling when she was demon possessed.  Now that the demon is gone, she is worthless to her master.  The owner foments a mob against Paul and Silas and they are beaten with rods in the city square. Think back to the pictures we saw from Egypt this year as they broke from the rule of Hosni Mubarak.  You can imagine how quickly these situations get out of control. Paul and Silas are thrown into the local jail.  At around midnight as they are praying and singing hymns to God, suddenly, there is an earthquake.  The doors fly open and the prisoners' chains fall off.  No prisoners try to escape. This causes the jailer to seek salvation and his whole household becomes Christians and are publicly baptized.

After being released from jail, Paul and Silas report to the city officials that they are Roman citizens.  This horrifies the officials and they apologize.  Paul and Silas go back to Lydia's house to stay.

Are you surprised at how Paul and Silas react to being beaten and jailed?  Why do you think they are singing praises to God for this persecution?  We can learn much about Paul's conviction that he must suffer greatly for Christ.  We do not see Paul insisting on a cushy and comfortable life.  We see his identification with Jesus in suffering.  This is maturity, people.  We can all learn from this example.  I need to brush up on my hymns!

Read this psalm with the idea that you are Paul and Silas sitting in jail.  Amazing.

It is wrong to punish someone for being godly.  Hmmm.  Wonder if the people in Macedonia knew this when they beat Paul and Silas.