June 9- Unless The Lord Builds The House


Unless the Lord builds the house, its builders labor in vain. ~Psalm 127:1 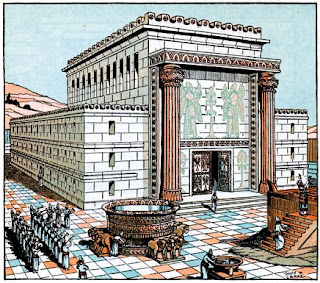 Have you ever built a house?  My husband and I built a house the year I became pregnant with my first child.  It was a bitterly cold winter and construction began in January.  Each day, we would go to the construction site in our winter coats and stand around in the whipping wind to make sure that the foundation was poured correctly and that the contractor was following our building plans.  I already told you the story about the mice being built into the walls of this house because they ran in to avoid the cold.  Today, Solomon begins a large building project.  The Temple was not truly the house of the Lord because He did not dwell there permenantly, but it was a place to meet God and offer sacrifices for sin.

The Temple was conceived by David, Solomon's father.  David was disturbed that he lived in a palace, while God moved around in a tent.  God would not allow David to build the Temple because he was a man of war, but God did provide David with the detailed plans of what the Temple should look like.  David gave those plans to Solomon, and as a man of peace, Solomon constructs the Temple.

Speaking of peace, we see that Solomon works out a peace agreement with Hiram of Tyre that includes Hiram providing the cedar and cypress wood that will be used in this gigantic project.  Solomon conscripted thousands of Israelites to live in Tyre and harvest the trees to be used in the construction of the Temple.

The Temple was twice the size of the Tabernacle and very ornate in design.  I thought it was interesting to learn that the Temple was a prefabricated building.  Apparently the stones used in the foundation and walls were measured and cut in the quarry.  They were then transported to the construction site and laid in place.  There were no sounds of hammers, axes or iron tools at the site.  Have you ever lived near a house that is being constructed?  It is the loudest, most annoying process.  Solomon prevented this misery by having the whole structure fashioned elsewhere and simply put together at the Temple mount.

We see that wood and gold overlaid is used again in the construction.  The symbols of pomegranates and palm trees, as well as cherubim are carved into the wood.  The Temple was a jewel in the city. Its construction took seven years.  Seven is the number of completion.  We see that in this project envisioned by his father, Solomon honors David by diligently completing his vision.  Solomon uses the best of what is available to honor the Lord with this Temple.  Solomon is obedient and faithful in this work.  He is diligent and enthusiastic. God is with him in the building of this Temple.

In what fashion do you approach the work that the Lord has given you?  Would you say that you are enthusiastic?  What about diligent?

When we last saw Stephen he was brought before the High Council of the Sanhedrin.  The Bible says that his face shown like that of an angel.  When this Council asks Stephen if the accusations were true that he blasphemed Moses and God, Stephen launches into a history of their people starting with Abraham.

Stephen recounts Abraham's faith in leaving his pagan homeland and traveling to the land where the Jews now live.  He mentions that circumcision was given to Abraham as a sign of the covenant to bless all nations through his descendants.  Stephen recalls that Jacob was the patriarch of the twelve tribes of Israel who were enslaved in Egypt for 400 years. But first, Joseph saved his father and brothers after having been sold into slavery in Egypt. Stephen mentions that Moses was raised up by God and raised in the household of Pharaoh.  Moses flees Egypt after killing an Egyptian who was mistreating an Israelite slave.

It is interesting to note that Stephen, who is filled with the Holy Spirit, is compelled by God to recount Israel's history of God's rescuing them and preserving them as a chosen people for His purposes.  Stephen has not attempted to defend himself.

Do you know your Bible well enough to recount the stories of God's faithfulness throughout history to someone?  Stephen is a remarkable man of faith.

The psalm for today deals with the Lord needing to be the builder of our lives.  He must build our house or else our lives are lived in vain.  He must also be the protector of our lives.

Gossips separate the best of friends.  How true.  Do you gossip?