June 17- One Is A Majority With God


One is a majority with God.
~Martin Luther 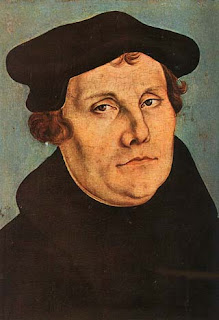 In the 1500's, tremendous religious turmoil occurred within the Roman Catholic Church that resulted in the Protestant Reformation.  The key figure in this struggle was a man named Martin Luther.  Luther was a German priest and professor of theology who began to demand reformation within the Church to clean up the corruption and false teaching associated with indulgences paid by the general population. These indulgences were a fee paid to the Church in order to have one's sins forgiven.

Martin Luther taught that salvation was a free gift of God's grace given to those who believed in the sacrificial death of Jesus Christ. Martin Luther stood alone as he faced his accusers at the Diet of Worms in Worms, Germany.  Luther stood alone for truth. Luther was not completely alone, though, because Martin Luther was accompanied by God. In today's reading, we see Elijah, who appears to be in the minority, is actually in the majority against the prophets of Baal because Elijah is accompanied by God. As Martin Luther so correctly proclaimed, "One is a majority with God."

The drought has lasted for three years.  Elijah comes to Obadiah, who is in charge of Ahab's palace, and tells Obadiah to tell Ahab that he is coming to see Ahab.  The encounter between Obadiah and Elijah gives us an inkling into how impressive a man Elijah is.  His holiness and strength in the Lord are renowned.  When Ahab comes out to meet Elijah, he calls Elijah "Israel's troublemaker."  Elijah will have none of this bunk.  He tells it like it is and says that the trouble of the drought has come about because of Ahab's worship of Baal. Elijah commands Ahab to bring the people of Israel, the 450 prophets of Baal, and the 400 prophets of Asherah to Mt. Carmel. He intends to have a contest between the gods.

Note that Elijah is greatly out numbered here. But remember, one is a majority with God. Two bulls are provided for a sacrifice.  Elijah proposes that whoever's God burns up the bull by fire, once called upon, is the One True Living God.  The prophets of Baal place their bull on the altar.  All morning they begin to shout to Baal. There is no answer. Next, they dance wildly. Still no response. By noon, Elijah begins to taunt them. He claims that Baal could be asleep or perhaps going to the bathroom, or on a trip, or in deep thought. The prophets of Baal get more frantic and begin to cut themselves in hopes that their shed blood will arouse their idol god. No go. 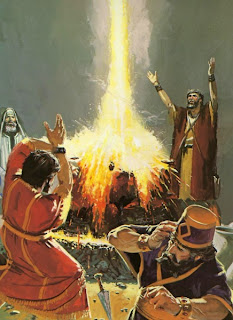 Elijah calls the crowd to his altar.  He places 12 uncut stones as the altar to represent the twelve tribes of Israel.  Remember that uncut stones represent God doing the work, rather than man doing the work of salvation.  Elijah has them pour four large jars of water onto the offering and the wood.  Then he prays to God to prove that The Lord is the God of Israel and that Elijah is God's servant. Immediately, fire from heaven burns up the offering, wood, and all of the water in the trench. The prophets of Baal are seized by the people and killed by Elijah.

Rain finally comes to the land and as Ahab leaves in his chariot to the city of Jezreel, Elijah is empowered by God to run on foot and overtake Ahab's chariot.  Elijah is one serious dude.  He kills 450 men and possibly 850 men, if you count the prophets of Asherah.  He is a warrior for God.  Then, he is an athlete for God as he sprints to beat Ahab to Jezreel.  The power of God's Spirit is something to behold.

This is an incredible story of the power of God over Satan.  People can be deceived into following false gods. They can be zealous in their religious devotion to these gods, even to the point of self harm. But truth does not depend on our passion. Truth is truth, no matter how we feel about it.  This story shows us that the God of Israel is the One and Only God on earth.  He is the Creator of Heaven and Earth. He, alone, must be worshiped.

Do you worship the One True God through faith in Jesus Christ?  Have you ever had to stand alone in that belief?

Today, we see the same Holy Spirit that empowered Elijah at work in the early Church.  Peter gets a scolding when he arrives back in Jerusalem.  Word has gotten back to his Jewish believing friends that he has eaten and stayed with Gentiles.  Peter relays the miraculous events surrounding the in-filling of the Gentiles with the Holy Spirit.  Once God's will for the Gentiles is understood, there is rejoicing for the work of God on earth.

Luke, the author of the book of Acts, explains that the persecution of the saints that occurred at Stephen's death caused Jewish believers to flee to Phoenicia, Cyprus, and Antioch in Syria.  There, they spread the gospel of Jesus only to the Jews. Some believers from these areas went to Antioch and started preaching to Gentiles, also. A large number of Gentiles begin to believe in Jesus. The Church in Jerusalem decides to send Barnabas to Antioch to see whether or not this has God's favor. 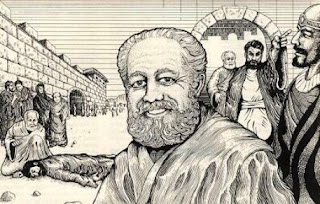 Barnabas is convinced that this is of the Lord and he teaches and ministers to the people in Syria.  At this time, Barnabas goes to Tarsus to get Saul to help him teach the people about Jesus and the Scriptures.  Remember that Saul is an extremely brilliant and well trained religious leader who is now converted to Jesus Christ. It is at Antioch that the believers are first called Christians.  We see that because of a prediction of famine, the Christians in Antioch send money to the church in Jerusalem to help those in need in the body of Christ.  These good works and unity are the fruit of the Holy Spirit impacting their lives as Jesus' body on earth.

We see that God's hand is working through persecution, visions, teaching, and trials. God uses all situations to reveal Himself and His power and mercy to His creation.

What are the evidences of the Holy Spirit in your life and in the life of the church you attend?  Who in the body of believers have you helped recently?  Does your local church gear any giving to help Christians in poverty?

This reminds me of the prophets of Baal.

Don't mess with a fool and repay evil with evil.